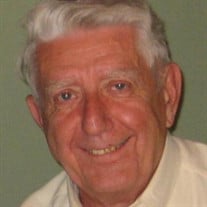 Altamont-John “Jack” Anthony McCullen of Altamont joined his devoted wife Edna in everlasting peace and love on Wednesday, September 15, 2021. So much made Jack special: his love of family; faith in God—taking over Edna’s prayer chair once she passed; mastery of archery; technical and engineering abilities—he could imagine, build and fix anything. Jack was the only child of Joseph Anthony and Alice McEneny McCullen and grew up in Albany on Partridge Street. He attended VI Glass School where he first met his future wife in kindergarten, and graduated from Vincentian Institute HS. Jack’s studies at Siena College were put on hold when he joined the Navy for 4 years of service, where he gained his electronic background as Intercommunication Technician, First Class. He also worked the movie projector for the crew and then again for the kitchen staff, for which he was rewarded with good food. Mocked for his excellent vocabulary and intelligence, he learned to swear and helped a few fellow sailors write letters home and sign their checks. Once discharged, he returned to Siena and secured his job at AT&T. On June 16, 1956, he married the love of his life, Edna Murtaugh, and spent the rest of his life devoted to her. Together they raised their seven children with lots of love and laughter. Jack will be welcomed to heaven by his parents, his wife and his daughter Helen. He is proud of his surviving children, MaryAlice (Jeff), Ann, Cathy (Doug), John, Joe (Lori) and Ed. Twelve grandchildren were deeply loved by Pop-Pop: Katie (David) and Jacqui; AnnMarie (Dan) and Ryan; Jackson; Sean and Stefanie (Chris); Brooke (Jean), Kyle and Jared, Ryan and Courtney; and Joshua (Gil) and Gabby. Jack's eight great-grandchildren will get to know Pops by the many lovely stories told and retold. Jack was a highly regarded archer. He remains in the New York State Senior Games record books in the Top Ten in Men’s Recurve for three different age categories. And though he was inducted into the NYS Archery Hall of Fame in 1986, his proudest archery moments were winning a double American shoot in 1946, the 1947 NYS Outdoor Championship as an Intermediate Boy, Atlantic City Classic, and the 1985 Empire State Games. In addition to being the Empire State Games Coordinator for 16 years, Jack also passed on his passion for archery by coaching and teaching in several organizations. He won more awards than can be mentioned, but he would be the last one to tell you about them. Jack retired from AT&T in 1989 after 35 years of loyal service, with the highlight of his career being responsible for international communications for the Lake Placid 1980 Olympics. His retirement allowed him to become a master chef, more involved in his beloved archery, a competitor in Empire State Games (as both Open and Senior), an avid Gunsmoke and Oak Island watcher, and sage advice-giver to those who asked. Fiercely independent and stubborn, Jack suffered from cancer silently until his body betrayed him. He was well-cared for by the staff at St. Peter’s Hospital and his children. Relatives and friends are invited to visit with Jack’s family Monday, September 20, 2021 4:00 pm to 7:00 pm at the McVeigh Funeral Home, 208 North Allen Street, Albany, NY 12206. Please only enter the funeral home from the rear parking lot doorway; unvaccinated individuals must wear a mask and practice social distancing. Funeral services Tuesday, September 21, 2021 at 10:00 am at St. Lucy/St. Bernadette Church, Altamont, NY where his Funeral Mass will be celebrated. The Rite of Committal will be held at St. Agnes Cemetery, Menands, NY immediately following the Funeral Mass. To leave a special message for the family please visit www.McveighFuneralHome.com Donations made be made in Jack’s name to Albany Hospice (communityhospice.org) or Shriner’s Hospital for Children

Altamont-John &#8220;Jack&#8221; Anthony McCullen of Altamont joined his devoted wife Edna in everlasting peace and love on Wednesday, September 15, 2021. So much made Jack special: his love of family; faith in God&#8212;taking over Edna&#8217;s... View Obituary & Service Information

The family of John A. "Jack" McCullen created this Life Tributes page to make it easy to share your memories.

Send flowers to the McCullen family.