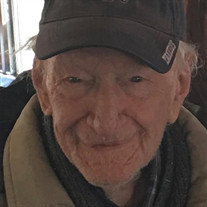 Albany- John J. Kenneally, of Albany, New York, was called home to the Lord on November 23, 2018. John was born on September 20, 1927 in Albany to the late Catherine (Hayden) Kenneally and John A. Kenneally, their only child. While attending Christian Brothers Academy, he was a member of the Track and Field team. In 1962, John married his beloved wife of 49 years, Patricia Kathleen Zeh, who passed in 2011. Through the years, they became the proud parents of three children. A true gentleman, John embodied all that is chronicled about the “Greatest Generation,” serving with honor and distinction in the United States Army-Air Force from 1945-1946 during World War II. With great pride in his Irish Catholic heritage, John was the longest standing member of the Albany Ancient Order of Hibernians, and for decades, marched in the City’s Annual St. Patrick’s Day Parade. John demonstrated an exceptional work ethic throughout his professional career in service to the Albany Railroad, Williams Press, and ultimately retiring from the Times Union during the 1990s. He was devoted to God and his family and was an active member and weekly Mass attendant at Blessed Sacrament Roman Catholic Church. He enjoyed walking his children to school in their early years, family vacations, being a regular for breakfast at Albany’s historic Jack’s Diner, and watching New York Yankees baseball games. He is survived by his loving children, Lisa Zagata of Rotterdam, Thomas and Michael Kenneally of Albany, beloved grandchildren Megan (Brian) Behne, Nathan Zagata, and dear great grandchild, Emma. He was predeceased by his grandson, Schuyler Lake. His family would like to thank the staff at Riverside Center for Rehabilitation and Nursing, and Amazing Grace Transportation for all the wonderful care and support they provided to John. Calling hours will be held on Wednesday, November 28, 2018 from 4 to 7 PM at McVeigh Funeral Home, 208 North Allen St., Albany, NY 12206. For further information or to leave an online condolence, please visit the McVeigh Funeral Home website at McVeighfuneralhome.com A funeral Mass will be held at 10:30 AM on Thursday, November 29, 2018 at Blessed Sacrament Church in Albany. Burial will take place immediately after at St. Agnes Cemetery in Menands. In lieu of flowers, memorial contributions may be made to the Blessed Sacrament Food Pantry, 607 Central Avenue, Albany, NY 12206.

Albany- John J. Kenneally, of Albany, New York, was called home to the Lord on November 23, 2018. John was born on September 20, 1927 in Albany to the late Catherine (Hayden) Kenneally and John A. Kenneally, their only child. While attending... View Obituary & Service Information

The family of John J. Kenneally created this Life Tributes page to make it easy to share your memories.

Send flowers to the Kenneally family.