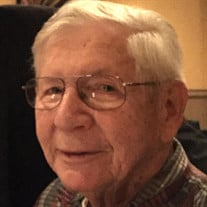 Albany-On Monday April 26, 2021 John Edward Kelly was reunited with his wife Marie, their son Robert, parents Mary and John, sister Mary Tholl, and Our Lord. John was born on May 26, 1925 in Albany, New York. He attended Blessed Sacrament School, Vincentian Institute, and Albany College of Pharmacy. He began working for his father at the soda counter at Kelly’s Pharmacy during high school. Upon graduation from Vincentian Institute in 1943, he enlisted in the United States Merchant Marine. John was very proud of his service and was always anxious to share his exciting tales from around the world. After training to work in the engine department on Liberty Ships, he served for three years, circling the globe twice. During this time, he survived two wars, three revolutions, violent storms at sea, V-1 bombings in London, and the delivery of troops and supplies to Normandy for the invasion on D-Day. His interests in travel, politics and world history would last a lifetime. In 1948, John was hired by General Electric in Schenectady. At “the invention factory”, he worked on the research and development of vacuum tubes, liquid crystal displays, man-made diamonds, and CT scan and MRI technology. His enthusiasm for his work was evident in nightly lectures at the dinner table on the many thrilling facets of life on “the razor’s edge of science.” These lectures, complete with expressive arm gestures and sound effects, instilled the belief in all his children that they too could contribute to monumental accomplishments. John’s pride in his own achievements was exceeded only by his pride in his children and grandchildren. On June 23, 1951 he married Marie Ruth Weinman. Together, they encouraged wonder and curiosity, demonstrated the power of humor and laughter, and fostered strength and courage in their children and all those who joined their family. John’s lifelong passion for photography, the tens of thousands of photographs he took of his family and the places he loved, reflected his desire to capture his awe in fleeting moments and his overwhelming gratitude for each one. Their children and grandchildren will remain forever grateful for these exceptional moments, vacationing on Lake George and Cape Cod and celebrating magical Christmases, and also for those scattered day-to-day moments in the home that made them who they’d become. John’s legacy includes children Susan Marie (Steve Shepherd), John III (Honey-Jo), Jim (Nancy), Annie (Bill Flaspohler), Margie Amodeo (David), and Mike (Susie Nagengast); grandchildren John E. Kelly IV (Alissa), Matthew Kelly (Heather), Tim Kelly, Nicholaus Kelly (Kristen), Zachary Amodeo (Julie), Benjamin Amodeo (Johanna), and Kevin Kelly (Grace); great-grandchildren Declan, Finnegan, Sawyer, and Faye; and so many others whose lives he touched. The Kelly family would like to express their profound gratitude to Linda McTague, Lisa Cook, Anita Peregrim, Cindy Seay, Michelle Martino, Laurie Decker, Catherine Duffy, Toni Patel, and Kolbe O’Neil. Their exceptional medical care allowed John to remain in his home and their kindness and compassion brightened his days. Funeral services Friday, April 30, 2021 at 10:30 am at Blessed Sacrament Church, 607 Central Ave. (Father John Bradley Way) Albany, NY 12206 where his Funeral Mass will be celebrated by their close family friend, Father John Bradley. Please only enter the church from the Hunter Ave. Parking Lot doorway; masks and social distancing are required; 150 visitors at a time will be allowed in the church. The Rite of Committal will be held at Our Lady of Angels Cemetery immediately following the Funeral Mass. To leave a message for the family please visit www.McveighFuneralHome.com Anyone wishing to honor John’s memory may make a donation to the Wounded Warrior Project at woundedwarriorproject.org.

The family of John Edward Kelly created this Life Tributes page to make it easy to share your memories.

Send flowers to the Kelly family.