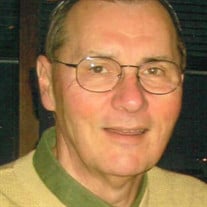 Guilderland - John W. Paradise (Jack) passed into eternal rest at home surrounded by his loving family on February 10, 2021. Born on January 28, 1940 in Albany, NY, he was the son of the late Vera L. (Clas) and Augusta R. Paradise. He is also predeceased by his older brother, August (Gus) Paradise. Jack was a graduate of Vincentian Institute, Albany, NY and Siena College, Loudonville, NY. He was a member of the Army National Guard from 1960-1964. He began his 55-year career in the insurance industry immediately upon graduation. Over the years, his promotions grew with the Insurance Company of North America (INA) as a Claims Adjuster, Claim Supervisor, and then Claim Manager of the Albany and Syracuse satellite office. Under Jack’s tenure, the Albany Claim Office received national ranking on three occasions and in 1981, was named number one in the country. In 1986, Jack became Founder and President of Paradise Adjustment Services, Incorporated, which he ran for 30 years. For most of his career he served as the Claims Adjuster for The Town of Colonie; a position he highly regarded, largely due to the wonderful relationships he developed. Jack’s reputation in the insurance world was one of professional integrity, esteemed insurance knowledge, veritable fairness, and loyalty to everyone he met. Jack was an avid sports fan, especially of Siena Basketball, where he enjoyed season tickets and attending games with family and his best friend, Jack Nash. He was also a previous member of Tall Timber Country Club and Pinehaven Country Club, where he played golf with his sons and friends. Jack had a pure love of “working his property.” He would spend countless hours planting, edging, trimming, and expertly placing more and more stones and rocks, making his family laugh while enjoying the beauty he created. Jack was a communicant of Christ the King Church in Guilderland, where he loved talking to Father Jim about the New York Yankees. Jack was a wonderful storyteller to the special people in his life. Every time he told a story from his deep catalog, it would become embellished. He also had a keen love of music, with a particular appreciation of orchestration and his favorite performer, Frank Sinatra. Jack’s genuinely big heart and outgoing personality made him a most authentic Santa during many Christmas seasons entertaining colleagues, family, and friends. He especially cherished his time in local hospitals visiting children battling illnesses to spread Christmas song, cheer, and love. Jack is survived by his wife of 56 years, MaryLou (Querques), whom he lovingly called “Blondie.” Together, they nurtured and raised their three children, MaryBeth, John, and Derek. Without a doubt, Jack’s greatest joy in life was being with his growing family. He loved his son-in-law, Joe Kramer, and daughters-in-law, Mary Elizabeth and Jennifer. His three children and their spouses also became parents to three children each, making him the most proud and beloved Poppy of nine grandchildren: Ryan (fiancée Kara), Kaitlin & Courtney Kramer; Madigan, Katie & Teagan Paradise; and Emma, Jillian & Anthony Paradise. Jack is also survived by his sister-in-law, Janet (James R.) Leach, and brother-in-law, John (Mary) Querques. He is pre-deceased by his sister-in-law, Trudy (and Robert) Smith. He is also survived by many loving cousins, nieces, and nephews. The Paradise Family thanks with a full heart the people who helped us care for Dad throughout his struggle with Alzheimer’s Disease. We most especially thank a very wonderful nurse, Tena, for her kindness, compassion, and the special presence she brought to Mom and Dad over the past year. She has become a treasured friend to our family. Relatives and friends are invited to visit with Jack’s family Monday, February 15, 2021 3:00 pm to 6:00 pm at the McVeigh Funeral Home, 208 North Allen Street, Albany, NY 12206. Please only enter the funeral home from the rear parking lot doorway; masks and social distancing are required; and 40 visitors at a time will be allowed in the funeral home. Funeral services Tuesday, February 16, 2021 at 11:30 am at Christ the King Church, Guilderland, NY where his Funeral Mass will be celebrated. Masks and social distancing are required. The Rite of Committal will be held at Albany Rural Cemetery. To leave a message for the family please visit www.McveighFuneralHome.com

Guilderland - John W. Paradise (Jack) passed into eternal rest at home surrounded by his loving family on February 10, 2021. Born on January 28, 1940 in Albany, NY, he was the son of the late Vera L. (Clas) and Augusta R. Paradise. He is also... View Obituary & Service Information

The family of John 'Jack' W. Paradise created this Life Tributes page to make it easy to share your memories.

Send flowers to the Paradise family.