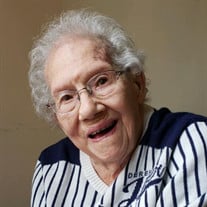 Albany-Jeanne F. Karath (nee Gibbons) 98, rejoined the love of her life Edward on January 22, 2020. Born in Cleveland, Ohio, on August 25, 1921, Jeanne was the first of eight children of the late Patrick M. Gibbons and Mildred (nee Kraus). She graduated from John Marshall High School in Cleveland, OH in 1939 and married Edward Albert Karath on September 26, 1942 in Cleveland. They lived in Springfield and South Charleston OH, Des Moines, IA and Columbus, OH before finally settling in Albany with their five younger children in 1965. She never lost affection for Cleveland. Jeanne was a lifelong Catholic, later joined in faith with Ed. They raised their children in Catholic Schools and both were very involved in school and parish life. At Holy Name in Columbus she was a creative Cub Scout den mother and was known for the patch of green in her hair that she sported every March 17 as she cashiered the school cafeteria. At St. Teresa’s, among other contributions, Ed and Jeanne were involved in the Respect Life Committee and she was the secretary at the rectory for her beloved Father Mealey. They were older but no less faithful congregants at Mater Christi. Many of her best friendships were forged through church activity. Jeanne’s work life (and some of her home life!) was mostly secretarial, beginning before WWII in Cleveland (Then kids started arriving!). Jeanne was affectionately known as “Ma” to her friends and coworkers at St Peter’s Hospital where she worked at the “heart station” until 1986. It was an enlightening experience to attend her retirement party and see how much she was enjoyed and admired by those friends. Then she created her home office where she was busy transcribing medical records. One only need a quick look in the Karath home to see the importance of family to Jeanne. Generations are pictured on the walls, mantles, tables, bureaus. She was especially keen on her Irish heritage and her 1986 trip to Ireland with friends from St. Teresa’s fulfilled a lifelong dream to explore her Gibbons/O’Malley roots. Above all, though, it was her children and grandchildren of whom she was most proud. She was demanding in their education. She loved to watch them perform on stage or on a field: Her voice rose above at many a football, soccer, softball, basketball or other game and she loved to go on the road to catch a grandkid’s game or to witness a performance. She was very proud of them in their adult accomplishments as well, in the families they raised, the work they did and the people they became (Jeanne was almost as enthusiastic about her Ohio State Buckeyes (Woody) and New York Yankees (Reggie, then Derek). And EVERY year, the extended family Christmas gatherings she enjoyed and for which she was most responsible, instilled that deep family connection. Ask any who knew her to describe Jeanne and they will invariably comment on her smile and laughter and humor. She brightened any occasion, and she loved occasions! You might also hear about how smart she was (she could have gone to college with a scholarship) or what a great confidant she was (letters and reams of printed e-mails attest to this). All her children are at least familiar with, if not appreciative of musicals and classical music, as Mom would frequently play those LP’s or sit at the piano herself. She and Ed believed in community and were generous to many causes and people. They also loved to travel, especially to visit their far-flung children around the country, to catch up with family at a wedding or attend a class reunion. Recent years made that impossible, but nothing was more true of Jeanne than that she persevered, whatever life threw at her, and that was true to the end. Jeanne was predeceased by Edward, her husband of 74 years, daughter Kathleen Hoffman (David), son Rev. William E. Karath, sister Margaret Gibbons and brothers James, Patrick, Richard and Thomas Gibbons. Jeanne leaves behind to treasure her memory her daughter MJ Garland (Robert) of Clifton Park, sons Thomas of Albany, John of Bozeman, MT, Michael (Karen) of Fishkill, and Robert (Sharon Morrissey) of Saratoga Springs; brothers John of Pickerington, OH and Ralph of Seville, OH; sister-in-law Jan (Thomas) of Brunswick, OH; son-in-law David Hoffman of Bluffton, SC; grandchildren Elizabeth Akpunonu (Basil) of Holland, OH, Patricia Buck (Daniel) of Somerset, PA, Julie Christner (Randall) of Tinley Park, IL, Matthew Hoffman (Brenda) of Sylvania, OH, Carrie Sue Drury (Tucker) of Eagle River, AK, Sarah Karath of Lehi, UT, Suzanne Karath of East Rutherford, NJ and Lander Karath of Boulder, CO. Jeanne is also survived by numerous nieces, nephews, cousins and 13 great grandchildren. Jeanne’s family would like to thank the staff at St Peter’s Rehab and Loudonville Assisted Living for the outstanding care and compassion she received over the past year. Relatives and friends are invited to visit with Jeanne’s family on Friday, January 24, 2020 from 4:00 to 7:00 pm in the McVeigh Funeral Home, 208 North Allen Street, Albany. Funeral services Saturday, January 25, 2020 at 11:15 am from the McVeigh Funeral Home, thence to the Parish of Mater Christi Church, 40 Hopewell Street, Albany at 12:00 pm where her Funeral Mass will be celebrated. The Rite of Committal will immediately follow the Mass at St. Agnes Cemetery, Menands. In lieu of flowers, Jeanne’s family asks that contributions in her memory be made to Mater Christi Food Pantry, 40 Hopewell Street, Albany, NY 12208. To leave a message for the family, light a virtual candle, obtain directions or view other helpful services please visit www.mcveighfuneralhome.com.

Albany-Jeanne F. Karath (nee Gibbons) 98, rejoined the love of her life Edward on January 22, 2020. Born in Cleveland, Ohio, on August 25, 1921, Jeanne was the first of eight children of the late Patrick M. Gibbons and Mildred (nee Kraus). She... View Obituary & Service Information

The family of Jeanne F. Karath created this Life Tributes page to make it easy to share your memories.

Send flowers to the Karath family.