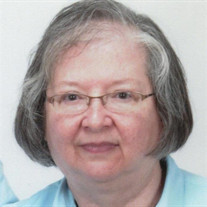 Albany - Janna Smith Pitlyk, 69, died in hospice at St. Peter’s Hospital with her family around her on Friday, Aug. 3, 2018, after suddenly falling critically ill in July. Janna leaves us with unforgettable memories of a life lived with a lovely smile, a gentle voice and a firm devotion to her loved ones. She introduced her husband to cats and antiques, her son to Star Trek and her daughter to figure skating. She gathered her family together for Sunday dinners and shared stories of her Pennsylvania family. Whenever she made a suggestion to her husband about looking for Christmas presents or making decisions about paint colors, she was always right. Whether setting play group times with neighborhood moms, volunteering for school activities or assisting with a move into a new apartment, she never tired of doing whatever she could for her two children. Janna was born on Oct. 7, 1948, in Canton, Pa., to the late Olen and Lenore Smith. She grew up there and graduated from Canton High School. She earned a bachelor’s degree in English and communications from Lock Haven State College in Lock Haven, Pa., and also studied at Columbia University in New York. She lived in New York City and Chicago for several years before moving to Elmira, N.Y., and worked in Elmira as a retail store manager. In 1981 Janna married her nextdoor neighbor Raymond Pitlyk, giving him the thrill of his life. They lived in Elmira until 1984, when her husband took a job at the Times Union. In Albany she worked at the Book House for a while and later became the long-time office manager for the Newspaper Guild of Albany-CWA Local 31034. She is survived by her husband, Raymond; her son David of Waterford; her daughter Anne of Albany; a sister, Alaire Smith-Miller of Vermont; and a niece. She was predeceased by her beloved brother, Richard. Calling hours will be 4- 7 p.m. Tuesday. August 7, at McVeigh Funeral Home, 208 North Allen St., Albany. A prayer service will be held at 11 a.m. Wednesday, August 8, at the funeral home. In lieu of flowers, donations may be made to the Food Pantries for the Capital District, 32 Essex St. Albany, N.Y. 12206. To leave Janna’s family a message on their guestbook, light a candle, obtain directions, or view other helpful services, please visit www.mcveighfuneralhome.com

Albany - Janna Smith Pitlyk, 69, died in hospice at St. Peter&#8217;s Hospital with her family around her on Friday, Aug. 3, 2018, after suddenly falling critically ill in July. Janna leaves us with unforgettable memories of a life lived with... View Obituary & Service Information

The family of Janna Smith Pitlyk created this Life Tributes page to make it easy to share your memories.

Send flowers to the Pitlyk family.