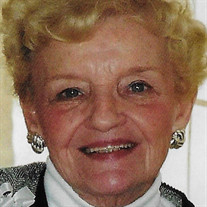 Janet Mulrooney passed into eternal life on October 27, 2018 surrounded by the love of family, friends and the dedicated staff of the Teresian House. Daughter of Sarah and William DeMyer, Janet was raised in Rensselaer, NY. She graduated from Holy Names Academy in 1938 and The College of St. Rose in 1943. She was predeceased by her devoted husband of 33 years, Charles (Tod) Mulrooney and beloved children Janet and Charles (Tod). Several years after her husband died she met Peter Stanish Sr. and found love and companionship with Pete until his death. She is survived by her four loving children, Patricia Giarrusso (Vincent), Colleen O’Sullivan (Thomas), Joan Strait (Paul), Michael Mulrooney and daughter-in-law Judy Mulrooney. Janet was blessed with five grandchildren who she adored, Scott Basile, Carrie Mulrooney Hemple, Stephen Strait, Katie Strait and Lauren Strait and two cherished great grandchildren, Charlotte Basile and Ruby Newton. She knew no boundaries when it came to making her grandchildren laugh and nothing interferred with Thursday’s hair appointment or Saturday’s cooking shows. Janet served as Personnel Director at Child’s Hospital for 25 years and President of the Northeastern NY Hospital Personnel Directors Association. In 2007 she received the Senior Lifetime Achievement Award for service to the community and to St. Thomas the Apostle Church in Delmar where she served as a lector and communicant for many years. She was a person of strong faith who always made time to listen and loved unconditionally. A woman of many gifts, Janet was warm and kind, strong and courageous, classy and beautiful, fun loving with a great sense of humor and an uncanny ability to grow old without growing old. Funeral services Tuesday, October 30, 2018 at 11:00 am at the Infant of Prague Chapel at Teresian House, where her Funeral Mass will be celebrated. The Rite of Committal will be held at St. Agnes Cemetery, Menands, NY immediately following the Funeral Mass. To leave a message for the family, please visit www.McveighFuneralHome.com In lieu of flowers, memorial contributions can be made in Janet’s memory to Teresian House Foundation, 200 Washington Ave Extension, Albany, NY 12203

Janet Mulrooney passed into eternal life on October 27, 2018 surrounded by the love of family, friends and the dedicated staff of the Teresian House. Daughter of Sarah and William DeMyer, Janet was raised in Rensselaer, NY. She graduated from... View Obituary & Service Information

The family of Janet Mulrooney created this Life Tributes page to make it easy to share your memories.

Send flowers to the Mulrooney family.