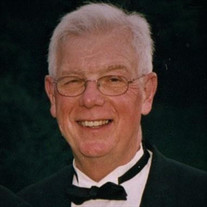 James (Jim) William Stevens of Tarpon Springs, FL, formerly of Loudonville, NY, died peacefully February 25, 2021 in Palm Harbor, FL. surrounded by his loving family and wife. He was 84. Born November 14, 1936 in Lansingburgh, NY to Anna Krogel and Clifford Edwin Stevens. He attended St Augustine in Lansingburgh and Catholic Central High School where he played football, basketball and baseball, graduating in 1954. He served in the US Naval Reserve. He began working for NYS DOT as a draftsman and completed his Associate Degree at Hudson Valley Technical Institute (HVCC). He worked in the structures department at NYSDOT, studying and progressing through the Civil Service Examination program until he was able to be licensed as a Professional Engineer. Through mutual friends, he met Grace Eleanor Lancaster, a student nurse at St. Peter’s Hospital School of Nursing, who became the love of his life. They married August 27, 1960. A devoted husband and father, Jim and Grace settled in Loudonville where they were active parishioners of St Pius X Parish and raised eight children, who he supported through every event, game, practice and life challenge, which he did with an open heart and pride-filled smile. He retired from NYSDOT in 1994 and joined Greenman-Pederson Inc. as a consultant, finally retiring in 2017. He had a passion for bridgework and enjoyed sharing his knowledge and experience. He was involved in the NYS Thruway development, the Newburgh-Beacon Bridge I & II, the Big Dig in Boston, and the Russell Sage Tunnel. He was a member of the NYS Society of Professional Engineers. In the structures department, he was one of the founding members of the golf league. A natural athlete - Jim was a multi-sport player including playing semi-professional baseball in the Albany Twilight League. He is a member of the Catholic Central Sports Hall of Fame. In addition to coaching, mentoring, tutoring, and serving as graphic designer for his wife and children, Jim coached in the Latham Little League, and served as special assistant to Grace in her Girl Scout Troop, in charge of planning, navigation, and camping support. His faith was strong and centered around church, often attending daily mass. At St Pius, Jim was an original member of the parish council, active in the Men’s club, president of the PTA, in the first group of Eucharistic Ministers, an usher and began the Saturday morning basketball program in 1975, which is still running today. He was always learning and encouraging others to become their best selves. Jim/Big Jim/Papa is survived by his loving wife of 60 years Grace; his children Marybeth (Michael Carhidi), Judy (Kevin Moriarty), Karen (Jubic), Michael (Rosie), Matthew, Patrick (Beth), James(Tricia) and Thomas (Samantha); 16 grandchildren - Lauren, Becca, Christopher, Theresa, Daniel, Fiona, Drew, James, Teddy, Aine, William, Jack, Savannah, Molly, Charlie & Harry; extended family: Joan (Carhidi) and Harold Sears, Lexie and Alora Paddon, Edward Jubic, Heather Stevens; his sister-in-laws Mary Ellen Stevens and Bobbie Allen; brother-in-laws Thomas (Sally) Lancaster and Timothy Lancaster; honorary children Kenneth (Suzy) Craig and Joey Kawola; as well as many nieces, nephews, great nieces and nephews. He is preceded in death by his parents, Anna & Cliff, his brothers Ned, Tom, & Larry and sister Anne Marie, niece Lynne as well as a stillborn son. In retirement, Jim was found traveling to visit his children and grandchildren around the country, attending baptisms, first communions, confirmations, graduations, weddings, funerals, soccer, basketball, baseball, field hockey and football games, swim and diving meets as well as serving in numerous capacities on the HOA board of their Tarpon Springs home. Jim and Grace were fortunate to travel with friends, family and the St Pius X choir. A Mass of Christian Burial was held Monday, March 1, 2021 at St Luke the Evangelist in Palm Harbor, FL. A Memorial Funeral Mass will be celebrated Friday, July 2nd, 2021 at 12:00pm at St. Pius X Church in Loudonville, NY. Relatives and friends are invited to visit with the family after 11:30am at the church. Interment will be follow at St. Agnes Cemetery, Menands, NY. In lieu of flowers, donations may be made to the Cystic Fibrosis Foundation, CT Chapter, 101 CenterPoint Drive, Suite 107, Middletown, CT 06457 in honor of James Stevens or you can connect through the following link: https://give.cff.org/tribute/JimStevens

The family of James W. Stevens created this Life Tributes page to make it easy to share your memories.