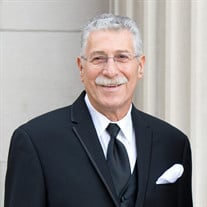 Colonie - J. Dennis Cafaro, 71, entered Eternal Life on November 13, 2019 with his beloved family at his bedside after a 10-month battle with cancer. Born in Albany, he was the son of the late Angelo A. Cafaro Sr. and Jennie R. Cafaro (Simon). After growing up in Colonie, he graduated South Colonie High School in 1966. He went on to study at Junior College of Albany, later graduating from Oklahoma City University in 1970 with a Bachelor’s Degree in Business Management. He was a proud brother of the Lambda Chi Alpha fraternity, where he was voted “Best Member of the Year.” After college, Dennis enjoyed a successful 35-year career as Manager of Office Operations/Business Manager at CHA Consulting, where he was admired by his colleagues. Dennis’ ultimate passion was serving his community. From 1995-2005, he was a Trustee of the South Colonie Board of Education, which included 2 years of service as the Board’s President. He co-founded South Colonie’s Dollars for Scholars chapter. South Colonie Schools honored Dennis’ years of service to the district by inducting him into their Hall of Fame in 2006. He was very dedicated to his faith as a 32-year parishioner at the Church of St. Clare in Colonie, where he spent many years on the finance committee. He served as a coach for Colonie Little League and was the Assistant Pack Leader for the Colonie Cub Scouts. For years and to this day, Dennis spent his summer weekends boating and camping with his family on Sacandaga Lake. He enjoyed annual vacations to Cape Cod and cruises with his dear friends. He loved his monthly guy’s night out at Ralph’s Tavern, where he was always DD. His hobbies at home included listening to his music, spending time at his desk & computer and doing home improvement projects. Dennis’ greatest gift was being the ultimate family man. He was an amazing father to his children. He cherished his four grandchildren. He was the “World’s Greatest Husband” to his wife Jean, where in 45 years she never once had to put gas in her car. He was loved by his brothers for his positivity, leadership and selflessness. He was the caregiver to both of his parents as they aged and always did it with a smile. Dennis is survived by his loving wife of 45 years, Jean, his children Dana Renzi (Alessandro), Philip (Michelle), his grandchildren Taylor and Hadley Cafaro, Biagio and Giada Renzi; Brothers Angelo Jr. (Patricia), Steven, David (Michele McCabe); Sister- in-laws Gail Borst (John), Donna Sanfilippo, Anne Howell (Michael); Brother-in-law Arthur Sanfilippo (Carol) aunts, uncles, cousins, nieces, nephews, great nieces and nephews and dear friends. The Cafaro Family would like to extend their sincere thanks to Dr. Susan Weaver and the NYOH staff, as well as Dr. Alan Boulos and the Albany Medical Center team for their compassionate care. Relatives and friends are invited to visit with Dennis’ family Monday, November 18, 2019 4:00 pm to 7:00 pm at McVeigh Funeral Home, 208 North Allen Street, Albany, NY 12206. Funeral services Tuesday, November 19, 2019 at 9:30 am at McVeigh Funeral Home, Albany thence to Christ Our Light Church, Loudonville, NY at 10:00 am where his Funeral Mass will be celebrated. The Rite of Committal will be held at Most Holy Redeemer Cemetery immediately following the Funeral Mass. To leave a message for the family, light a virtual candle, obtain directions or view other helpful services please visit www.McveighFuneralHome.com Those wishing to remember Dennis in a special way may send a contribution to South Colonie Dollars for Scholars. PO Box 12413, Albany, NY 12212 or online at Southcolonie.dollarsforscholars.org

Colonie - J. Dennis Cafaro, 71, entered Eternal Life on November 13, 2019 with his beloved family at his bedside after a 10-month battle with cancer. Born in Albany, he was the son of the late Angelo A. Cafaro Sr. and Jennie R. Cafaro (Simon).... View Obituary & Service Information

The family of J. Dennis Cafaro created this Life Tributes page to make it easy to share your memories.

Send flowers to the Cafaro family.