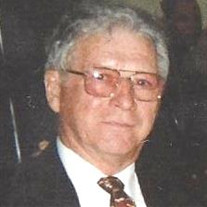 Henry Paul Gadomski passed away peacefully on Saturday May 26, 2018. He was born in Albany on April 28, 1928. Henry recently celebrated his 90th birthday at his home surrounded by his children and grandchildren. Henry was the son of Konstanty and Emilia Gadomski and grew up on Third Street in Albany’s Arbor Hill neighborhood during the Great Depression and World War II. He was the 15th of 17 brothers and sisters. He attended St. Casimir’s Grade School and then Albany High School, graduating in 1947. At Albany High, Henry played varsity basketball in his junior and senior years. He was tall and strong and excelled at the center position. During his senior year, Albany had one of their best years ever. In a 1961 article in the Times Union, famed Albany High basketball coach, Nate Sutin, spoke about his 23 year coaching career. He stated the best team he ever coached was the 1947 team. They were called ‘the point a minute team.’ He said they had one of the finest records in the school’s history. In 1948, Henry enlisted in the US Navy. He served as a machinist mate on board the USS Yosemite stationed out of Newport, Rhode Island. After his service in the Navy was up, he returned home to Albany in 1950. He began working for Niagara Mohawk. He also started dating the girl who lived just eight houses away from him on Third Street, Anna Macutek. Two years later, on June 15, 1952, they were married at St. Casimir’s Church. Anna and Henry celebrated their sixty-fifth wedding anniversary just last year. In their long and happy marriage they had three children, David, Lori and Phillip, and in turn eight grandchildren. His faith was an important part of his life, and he was a 50 year member of the Nocturnal Adoration Society and attended daily Mass for more than 75 years. Henry always loved sports. He was a life-long Yankee fan, New York Giants and Notre Dame Football fan, and Duke Bluedevils basketball fan, But even more than watching these teams, he enjoyed watching and coaching his own children and grandchildren in sports. Henry coached teams at National Little League for nine years. He also coached CYO basketball for several years at Vincentian Institute. It wasn’t unusual for Henry to be stopped at a restaurant or at the mall by some middle-aged man who would come up and say, “Hey Coach Gadomski, remember me? I was on your team in Little League in …” Henry retired in 1988 after 37 years at NiMo. He enjoyed a long and healthy retirement where he took up yet another sport, golf. He played weekly with his very good friends Larry Gray, Roger Nachbar, Bob Eberle, Bob Colvin and Harold Bauer. Henry is predeceased by his wife and best friend Anna (Macutek) Gadomski. He is survived by his children, David (Kathy) Gadomski, Lori (Joe) Herkenham, and Phillip (Sherri) Gadomski, his grandchildren, Tessa (Michael) DePersio, Sarah Gadomski, Paula Gadomski, David (Liz) Herkenham, Annie Herkenham, Christina Herkenham, Hope Gadomski, Charlie Gadomski, CJ Notaro, Mikayla Notaro, Justin Notaro and three great grandsons. He had many nieces and nephews and cousins as well. One of Anna and Henry’s favorite charities was the Sister Maureen Joyce Food Pantry that serves the old St. Casimir’s neighborhood. If you prefer a charitable gift in lieu of flowers, please consider this charity. Relatives and friends are invited to visit with Henry’s family Wednesday, May 30, 2018 4:00 to 7:00 pm in McVeigh Funeral Home, 208n North Allen Street, Albany, NY 12206. Funeral services Thursday, May 31, 2018 11:15 am from McVeigh Funeral Home, Albany thence to 12:00 p m in All Saints Catholic Church, Albany, NY where his Funeral Mass will be celebrated. The Rite of Committal will be held in Calvary Cemetery, Glenmont, NY immediately following the Funeral Mass. To leave a message for the family, light a candle, obtain directions or view other helpful services please visit www.McveighFuneralHome.com

Henry Paul Gadomski passed away peacefully on Saturday May 26, 2018. He was born in Albany on April 28, 1928. Henry recently celebrated his 90th birthday at his home surrounded by his children and grandchildren. Henry was the son of... View Obituary & Service Information

The family of Henry Paul Gadomski created this Life Tributes page to make it easy to share your memories.

Henry Paul Gadomski passed away peacefully on Saturday May 26,...

Send flowers to the Gadomski family.