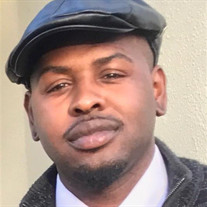 Albany – Son, brother, father, friend Haakim Mustafa Ubay Avant Daye Williams, a professional welder of Albany NY, died unexpectedly on September 26,2019 at the age of 30. Haakim Mustafa is survived by his mom, Sheena Davis Avant, step dad Marc Pearson, and father Prime Williams, stepmom Sabrina Williams; his daughter Ha’niya Heavenly Earth Avant; his sisters Shaneeva Avant, Quaniqua Avant, Autumn Avant, DeAsia Williams, Tamia White; his brothers Jason Rose Jr., Marc Pearson Jr., Jahsaar Williams, Maquan & Mykeese; his grandparents Deborah Avant and Samuel Daye, and aunts and cousins. Haakim Mustafa, lovingly called “Mu” was born in New York on January 13, 1989 to Sheena Davis Avant and Prime Williams. As a teenager he attended John F Kennedy High school, where he became a Kennedy Knight on the football team and found his love for football. He played 9 different positions! Football was his passion. After High-school he was united with his father and moved to Georgia in 2010. His father took him into his family business and taught him the trade of welding. Mu was born a natural. He quickly picked up on welding and followed into his father footsteps. Continuing his journey, Mu moved back to NY to help his mom, brothers and sisters. Mu got a job welding in Albany near his sister Shaneeva, he decided to stay. Mu found love with Glorious Elting. On December 07, 2018 he welcomed his beautiful daughter Ha’niya Heavenly Earth Avant, who was the most important part of his life. She meant more than anything to him. Mu was a devoted father. He enjoyed music and family time. He was a great cook and family man. Laughter kept him going. A smile stayed on his face. He was a problem solver who often took on difficult and unwanted projects at work and around the house. He will be deeply missed by his family, friends, and all who he knew. Relatives and friends are invited to visit with Haakim's family on Sunday, October 6, 2019 from 12:00 to 2:00 pm in the McVeigh Funeral Home, 208 N. Allen Street, Albany. A short prayer service will be held at 1:00 pm. The Rite of Interment will be held at 11:00 am Monday, October 7, 2019 at Rosedale Cemetery, 350 E. Linden Ave, Linden, NJ 07036. To leave Haakim's family a message on their guestbook, light a candle, obtain directions, or view other helpful services, please visit www.mcveighfuneralhome.com

The family of Haakim Ubay Mustafa Avant Williams created this Life Tributes page to make it easy to share your memories.