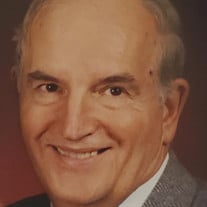 Queensbury-George Atterbury Mathewson, Esq of Queensbury and Lake George passed away unexpectedly Tuesday, January 4, 2022 at home. He was the son of Dr. Joseph Bryant Mathewson and Christina Moncrief Mathewson. George was born in 1935 in Paterson NJ where his grandmother lived. He graduated from Ithaca High School where he was a student government officer, varsity tennis player, and selected as the conference All-Star Quarterback. Later he played semi-pro football in Watertown, NY. George graduated Cum Laude from Amherst College in 1957 where he played quarterback on the football team and rowed on the varsity heavyweight Crew. He received an LLB from Cornell University Law School and an LLM in Antitrust Law from the University of Michigan Law School He worked for the Federal Trade Commission in Washington, DC then the NYS Department of Environmental Conservation as Regional Attorney in Liverpool, NY. George had a law practice in Syracuse and later Manlius, NY for over 40 years. He was an Adjunct Instructor in Business Law at Onondaga Community College in Syracuse, NY for 8 years. George was active in the Manlius Chamber of Commerce, the Steuben County Historical Society, the Yates County Arts Center, the Finger Lakes Chamber Music Festival, the South-Side Business Association, the Onondaga Kiwanis Club of Syracuse, the Town of Lake George Comprehensive Planning Committee 2014-2016, and the Committee to Preserve the Finger Lakes. George volunteered with the Habitat for Humanity, he was a sponsor and worker at the Winter Special Olympics. He was a longtime congregant and later a deacon at Onondaga Hill Presbyterian Church in Syracuse. He also helped coach his son’s football, baseball, and basketball teams, along with assisting Jim’s Boy Scout Troop. After he retired from his law practice, he wrote 4 books including The Dried Earth, What Happened to Our Water, and A Boy Named Martin. He is survived by his wife of over 46 years, Ann McVeigh Mathewson, his son James, his two grandsons Garrett and Theodore, a sister Christina Salerno and brother Joseph D. Mathewson. George was recently recognized for 50 years membership in the Onondaga County Bar Association. A Memorial Service will be held at a later date. To leave a special message for the family please visit www.McveighFuneralHome.com Those wishing to remember George Atterbury Mathewson, Esq in a special way may send a contribution to the YMCA Camp Cory, 140 E Lake Road, #54, Penn Yan, NY 14527

Queensbury-George Atterbury Mathewson, Esq of Queensbury and Lake George passed away unexpectedly Tuesday, January 4, 2022 at home. He was the son of Dr. Joseph Bryant Mathewson and Christina Moncrief Mathewson. George was born in 1935 in Paterson... View Obituary & Service Information

The family of George Atterbury Mathewson Esq created this Life Tributes page to make it easy to share your memories.