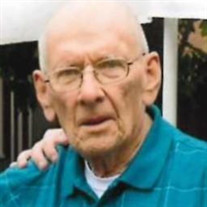 Albany - George A. Macutek, 85, passed away on May 26, 2020. He was born in the Slovak and Polish enclave of Albany’s Arbor Hill, the son of the late Joseph Macutek and Mary Zielonka. Growing up here, the streets were his playground and the Hudson River the place where he learned to swim and fish. He experienced the world through movies at the Palace and Strand theaters downtown. He always had a job throughout his early years whether it was picking vegetables, delivering groceries, or washing dishes. He attended St. Casimir’s school, where he served the Latin Masses as an altar boy. He graduated from Philip Schuyler High School, enlisting in the US Army soon thereafter. He was stationed in Cold War Berlin, where he met his late wife, Helga Brock. They married in Germany and she relocated with him to Albany where they made their home. He began working in paper mills, eventually landing a coveted job as a mail carrier and clerk with the US Postal Service in Delmar. He was Dziadzia to his grandsons and after his wife died, he busied himself chauffeuring them to their appointments and after-school activities with perhaps a detour for a treat. As his grandsons went off to college, he made a point of slipping them some cash for “gas” before each semester resumed. He is survived by his two children, Carol (Timothy) Carman and Mark (Fran) Macutek; his grandsons Kurt (Carly) and Alec Carman; Matthew, Thomas, and Jason Macutek. He is also survived by his older brother Joseph (Angie) Macutek; his cousin, June Lacijan and many nieces and nephews. He was predeceased by his sisters Anna (Henry) Gadomski and Mary (Leo) Nosal. The family would like to give a special thanks to the staff at Promenade at University Place, who caringly assisted our father with the activities of daily living over the past eighteen months. In lieu of flowers, donations may be made in George’s memory to GoFundMe, Feed Albany Covid-19 Relief Fund(https://www.gofundme.com/f/feed-albany-covid19-relief). Due to the current pandemic, services will be private for the family. Interment will be in Bethlehem Cemetery. To leave George’s family a message on their guestbook, light a candle, or view his Cinematic Life Tribute, please visit www.mcveighfuneralhome.com

Albany - George A. Macutek, 85, passed away on May 26, 2020. He was born in the Slovak and Polish enclave of Albany&#8217;s Arbor Hill, the son of the late Joseph Macutek and Mary Zielonka. Growing up here, the streets were his playground and... View Obituary & Service Information

The family of George A. Macutek created this Life Tributes page to make it easy to share your memories.

Send flowers to the Macutek family.