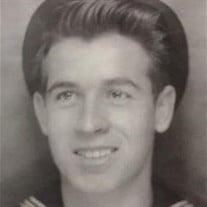 Delanson – Francis H. “Sonny” Garney, 92, passed away peacefully surrounded by family on Thursday, July 25, 2019 at Ellis Hospital. Born in Plattsburgh, NY he was the son of the late Henry Garney and Evelyn Denschler (Henry). He served his country honorably in the Navy near the end of WWII. Sonny, as he was known to everyone, was a longtime custodian and school bus driver for the Schalmont School District, retiring in 1988. He was a devoted husband and caregiver to his wife of almost 62 years, Grace Fifield Garney, until her passing in 2009. Sonny was a loving and devoted father of Nancy (Robert) Colbert of Amsterdam and John (Natalie Guerin) Garney of Delanson; former father-in-law of Cindy Garney; cherished grandfather of David (MaryBeth) Colbert, Mark Colbert, Denise (Edward) Innes, Brian Garney, Eric (Kayleigh) Garney, Joseph Garney, and Tina Garney (Bryon Pechtel); adored great-grandfather of Samantha Naple, Taylor and Christopher Colbert, Edward Innes, Jr, Elizabeth and Emily Innes, Grace Garney, Lilah, Clayton and Silas Garney. Also survived by many nieces, nephews, great nieces, and great nephews. In addition to his parents, stepfather, and wife, Sonny was predeceased by his sons Robert Garney and George Garney; his sisters Patricia Provost and Evelyn Daniels; and his brother Clarence Garney. Relatives and friends are invited to visit with Sonny’s family on Monday, July 29, 2019 from 4:00 to 7:00 pm in the Bond Funeral Home, Broadway and Guilderland Avenue, Schenectady. A Funeral Service honoring Sonny will be Tuesday, July 30, 2019 at 10:30 am in the Bond Funeral Home. The Rite of Interment will immediately follow the service at Sts. Cyril and Method Cemetery, Rotterdam where he will be reunited with his beloved Grace. To leave a message for the family, light a candle, or view other helpful services, please visit www.mcveighfuneralhome.com

The family of Francis H. "Sonny" Garney created this Life Tributes page to make it easy to share your memories.

Send flowers to the Garney family.