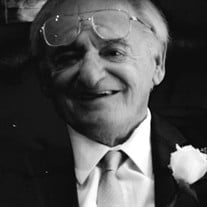 Altamont-Eugene Kory Tyksinski, 87, of Altamont passed away peacefully in his home on February 18, 2022, with his family by his side. Born January 14, 1935 in Rome, NY a son of the late Kostyn and Mary Farraggio Tyksinski. Gene is survived by his beloved wife Elizabeth Roetter, his children Cory Tyksinski (Paige), Stephen Tyksinski (Tracey), Mary Beth McGarrahan (Brian), Matthew Tyksinski (Emily), and his siblings Constance Castro (the late Armando) of Rome, Martin Tyksinski (Maria) of Mukwonago, WI and sister-in-law Charlotte Tyksinski. He was preceded in death by his brothers Richard Tyksinski and Frederick Tyksinski (Charlotte). He frequently boasted about his 7 grandchildren: Taylor Picard (Joseph), Tory Tyksinski, Bridget Tyksinski, Sam McGarrahan, Thomas Tyksinski, Jack McGarrahan and Theodore Tyksinski. Gene was also a doting, caring uncle to his many nieces and nephews. After graduating from Rome Free Academy, Gene attended Le Moyne College where he received his Bachelor of Science in 1959. He then served honorably in the Marines, from 1959-1963, achieving the rank of Captain. His experience in the Marines played a very important role in his life. He frequently pointed out that the Marines taught him the value of discipline, teamwork, and investing in a cause larger than himself. Not only did he volunteer for his country, he dedicated his civilian life to public service. He proudly worked for 30 years within the NYS Senate, serving ultimately as the Secretary of Senate Finance Committee. Upon retirement from the state, he then took on the role of Executive Director of Association Public Broadcasting Stations. He enjoyed many hobbies in his lifetime: sailing, golf, tennis, reading books, listening to music and riding his John Deere tractor in his field while smoking a cigar. The family is being served by McVeigh Funeral Home, 208 N Allen St., Albany, 518.489.0188. A Memorial Service immediately followed by a celebration of his life will be planned for a later date. To leave a message for the family please visit www.McveighFuneralHome.com In lieu of flowers, contributions may be made to The Community Hospice, 455 New Karner Road, Albany, NY 12205 or the Juvenile Diabetes Research Foundation Upstate New York, 1757 Central Avenue, Suite 102, Colonie, NY 12205.

Altamont-Eugene Kory Tyksinski, 87, of Altamont passed away peacefully in his home on February 18, 2022, with his family by his side. Born January 14, 1935 in Rome, NY a son of the late Kostyn and Mary Farraggio Tyksinski. Gene is survived... View Obituary & Service Information

The family of Eugene K. Tyksinski created this Life Tributes page to make it easy to share your memories.