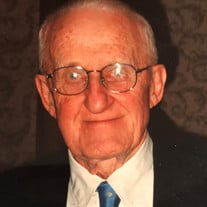 ALBANY-Eugene W. Munsell, 100 years young, entered Eternal Life Thursday, February 7, 2019. Born in South Amboy, NJ and raised in Amsterdam, NY he was the only child of Eugene and Mary Agnes Galligan Munsell. He was a graduate of St. Mary’s Institute, Amsterdam and the Amsterdam School of Commerce. He was the beloved husband for over 68 years of the late Ruth Deyo Munsell, who passed away just nine months ago. Gene was the dear father of Stephen C. Munsell (Lori Gianquitto), Gerald A. Munsell and the late John Francis Munsell and Patricia Jean Munsell Koethen (John Koethen); beloved grandfather of Allison (Robert Napierski), Amelia, Nora, Paul, and Nicholas; great grandfather of Rae Josephine. Gene served in the US Army and was stationed in Portland, ME during WWW II. He was employed by the NYS Department of Labor for 42 years. Gene served as treasurer of several community organizations including first treasurer of the Upper Washington Avenue Neighborhood Association. He was a longtime parishioner of All Saints Catholic Church, formerly called St. Margaret Mary Church. Gene was a graceful athlete and an accomplished musician. For decades he played bass with The Gene Munsell Quartet. His children remember him playing the violin and mandolin around the house when they were kids and close friends and family loved receiving his famous birthday phone call which always started with him playing Happy Birthday and ended with an Irish fiddle tune. Gene loved sports, especially baseball. He started playing in high school and continued in the Albany Twilight League briefly and the New England division of the US Army Baseball Team. He played softball with his coworkers in the Department of Labor, coached youth teams and in retirement he refereed for several capital region leagues. As a young man Gene played ice hockey in the Amsterdam Hockey League. He also enjoyed golf and bowling but always said his favorite memories were of trout fishing in the Adirondacks with his lifelong friends Bob, Hugh, Frank and Tony. Relatives and friends are invited to visit with Gene’s family Monday, February 11, 2019 4:00 pm to 7:00 pm in McVeigh Funeral Home,208 North Allen Street, Albany, NY 12206. Funeral services and interment services will be held privately. Those wishing to remember Eugene W. Munsell in a special way may contribute to a charity of your choice. To leave a message for the family, please visit www.McveighFuneralHome.com

ALBANY-Eugene W. Munsell, 100 years young, entered Eternal Life Thursday, February 7, 2019. Born in South Amboy, NJ and raised in Amsterdam, NY he was the only child of Eugene and Mary Agnes Galligan Munsell. He was a graduate of St. Mary&#8217;s... View Obituary & Service Information

The family of Eugene W. Munsell created this Life Tributes page to make it easy to share your memories.

Send flowers to the Munsell family.