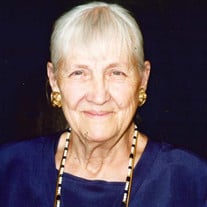 Albany- Esther passed into eternal life peacefully on Monday December 11, 2017. Born in Amsterdam, NY, Esther was the daughter of Maximillian and Victoria (Szurek) Werner. She is predeceased by her husband of 48 yrs. Frank A. McEvoy, her parents and her sister Dorothy (Werner) Gayder of Amsterdam. She is survived by a son Frank McEvoy Jr. (Yvette) and two beloved grandchildren Morgan and Max as well as many cousins across the Mohawk Valley. Esther dedicated her life to the education of professional nurses. She was active in establishing the Nursing Department at Maria College in Albany, NY, setting standards for excellence and student achievement that remain evident today. A 1949 graduate of the St. Peter’s Hospital School of Nursing, Esther received a Bachelor of Science from Russell Sage College in 1956 and a Master of Science in 1969. Esther retired from the faculty of Maria College in 2003 having served as Chair of the Nursing Department from 1971 - 2003 achieving the rank of Professor Emeritus. Esther was honored by her peers for her many years of contributions to the nursing profession as a colleague, teacher, mentor, leader, officer and Board member. A lifelong sports fan, Esther was a vocal supporter of her grandchildren’s athletic endeavors. She was also an avid handicapper and enjoyed many August days at Saratoga. The family wishes to express sincere thanks to her devoted aides, Helen and Cookie, who guided us through the past 18 months, and the B2 staff at Van Rensselaer Manor whose thorough professionalism and compassion were invaluable in her final days. And finally, thank you to her former students and colleagues; you gave Esther purpose and helped her achieve the satisfaction of a full life in service to others. Relatives and friends are invited to visit with Esther’s family on Tuesday, December 17, 2017 from 4:00 to 7:00 pm in the McVeigh Funeral Home, 208 North Allen Street, Albany. Funeral services Wednesday, December 20, 2017 at 9:15 am from the McVeigh Funeral Home, thence to Our Lady of the Assumption Church, Latham at 10:00 am where her Funeral Mass will be celebrated. Interment will follow the Mass at 1:00 pm at the Gerald B.H. Solomon Saratoga National Cemetery, Schuylerville. To leave a message for Esther’s family on their guestbook, light a candle, obtain directions, or view other helpful services, please visit www.mcveighfuneralhome.com

Albany- Esther passed into eternal life peacefully on Monday December 11, 2017. Born in Amsterdam, NY, Esther was the daughter of Maximillian and Victoria (Szurek) Werner. She is predeceased by her husband of 48 yrs. Frank A. McEvoy, her parents... View Obituary & Service Information

The family of Esther K. McEvoy created this Life Tributes page to make it easy to share your memories.

Send flowers to the McEvoy family.