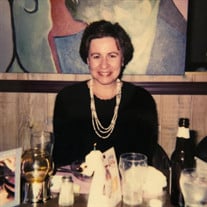 Albany-Elena Oliver passed away peacefully at home, surrounded by loved ones, on April 25, 2020 after a nine - month battle with cancer. She was barely 71. She was wonderful – smart, honest, loving, independent, funny, beautiful, and a great friend to so many. She was, as her brother Frank put it, our rock. Elena was diagnosed with end-stage cancer last July. The diagnosis seemingly came out of the blue and left all that knew and loved her shocked and devastated. But Meme, as she was known to her beloved grandsons, refused to give in and fought with a determination and lack of self-pity that most of us couldn’t muster. She was aware of the long odds at the beginning of the difficult journey, but insisted that life be kept as normal as possible until the end. So that’s what we did. There were so many medical appointments, yet she persevered and held out hope even as she weakened. She looked forward to spending time outdoors as the weather, and hopefully her condition, improved. In the end, she passed on a Saturday afternoon on what was likely the most beautiful day in a month. Her son Peter kissed her forehead; she took a deep breath, exhaled, and was finally able to rest. Elena was born to Ida and Frank Ferrandino and raised in Albany, NY. She married her Albany High School sweetheart, Richard Oliver, at the tender age of 20 and within several years gave birth to two sons: John and Peter. She raised her boys and, when they were old enough, returned to school and obtained her degree from Hudson Valley Community College. She worked for many years as an X-ray technician and, as her sons reached college age, she returned to school and earned her bachelor’s from Siena College. In fact, she and John attended Siena at the same time, and her son will always fondly remember their on-campus encounters. Elena changed careers and worked for many years as the admissions coordinator for Eddy Heritage House in Troy. She spoke fondly of her co-workers over the years and made long lasting friendships at the Eddy. She and Richard ended their marriage after 35 years, yet remained close friends until the end. She was a thoughtful, quiet, peaceful person. She loved her time alone reading books, caring for her incredibly pampered cats and tending to her yard. During her single years, Elena developed a large group of friends and enjoyed dinner parties, movie nights at the Spectrum and travelling within the U.S. and abroad. She was also a great listener and was sought out by family and friends as a provider of excellent advice on all things life-related. Elena loved spending time with her grandsons; she was a regular at their baseball and basketball games, wrestling meets, musical performances and theatrical productions. She referred to her grandsons in her last days as her “precious boys”. The many she leaves behind are left to cope with the unfairness of what happened to her so early in her retirement years after living such a good and decent life. We are also left to cope with the pain of seeing such a special and vibrant person rapidly worn down by her illness. But we are relieved to know that the suffering has come to an end. Most importantly, we are left with the fondest memories of a great mom, wife, grandmother, daughter, sister, mother-in-law, sister-in-law, and friend. She was and will always be truly loved. Elena is survived by her mother Ida Geraci (Albany), her brothers Frank and Michael (Albany), her ex-husband Richard and his wife Debra (Malden Bridge), her son John and his wife Gretchen (Guilderland), her son Peter and his wife Kristina (Albany), her four grandsons: Alex, Jacob, Sam and Nate, and by her many loving nieces, nephews and in-laws. Elena’s family wishes to thank the doctors who cared – genuinely cared – for her, as well as the aides and hospice nurses who made her last few weeks as comfortable for her as possible. We will always be struck by the level of kindness they showed to her and to us. And thank you to the family and friends who cared for her and were always there for her until the end. The pandemic has forced us to limit our memorial service to only immediate family, and we look forward to celebrating Elena’s life with extended family and friends in what we hope is only several months. In lieu of flowers, please consider making a donation to one of Elena’s favorite charities: Mohawk Hudson Humane Society in Menands (mohawkhumane.org), or Whiskers Animal Benevolent League in Albany (ewhiskers.com). Online condolences may be offered at mcveighfuneralhome.com.

Albany-Elena Oliver passed away peacefully at home, surrounded by loved ones, on April 25, 2020 after a nine - month battle with cancer. She was barely 71. She was wonderful &#8211; smart, honest, loving, independent, funny, beautiful, and... View Obituary & Service Information

The family of Elena Oliver created this Life Tributes page to make it easy to share your memories.

Send flowers to the Oliver family.