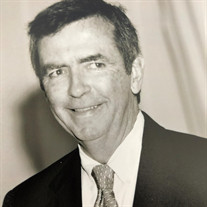 Loudonville-Edward J. Kearney, 76, entered Eternal Life Friday, January 19, 2018 in the Hospice Inn at St. Peter’s Hospital. Born in Albany, he was the son of the late Edward and Marion Williams Kearney. Edward was a graduate of Vincentian Institute and University of Notre Dame in 1963. He went on to earn his Masters Degree from RPI, and took graduate courses at Union College. Ed was an engineer for New York State Department of Transportation and former Chief Engineer for Gorman Brothers. He was a Senior Engineer for the Asphalt Institute, and Director of Engineering for Wirtgen America, Inc. While at DOT, Edward developed special environmentally sensitive design standards for state highways for local roads in the Adirondack Park prior to the Lake Placid 1980 Winter Olympics. He lectured in many states for the Asphalt Institute, and was a leader in Cold Recycling Technology. Ed was a board member of Trans Tec, Inc, and the Transportation Research Board. He was also a board member of the Asphalt Recycling and Reclaiming Association and was awarded their Richard E. Lowell Presidents Award. He also was awarded the 2014 Spirit of Notre Dame Award. In addition to his very successful career as an engineer, Ed loved spending time with his family, along with golfing and photography. He was the beloved husband and best friend of Kathleen L. Lauterborn Kearney; dear father of Kristin R. Kearney, Lauren E. Hayes (David) and Brian E. Kearney (Susan); cherished grandfather of Caroline Hayes, Patrick Hayes, Grace Hayes, Margaret Hayes, William Hayes, Claire Kearney and Brendan Kearney; brother of Margaret Curley (late Jack), Patricia Lynch (Edmund) and Marcia O’Donal; many nieces, nephews and friends survive. The family would like to extend a heartfelt thank you to the staff that became more than just aides, but friends, Sheila, Brittany, Shanalaha, Holly, Carrie, Melissa, and Kelly. Relatives and friends are invited to visit with Ed’s family Tuesday, January 23, 2018 4:00 pm to 7:00 pm in St. Pius X Church, Loudonville, NY (Please enter the church via the Chapel doors). Funeral services Wednesday, January 24, 2018 at 10:00 am in St. Pius X Church, Loudonville where his Funeral Mass will be celebrated. The Rite of Committal will be held in St. Agnes Cemetery, Menands, NY immediately following the Funeral Mass. Those wishing to remember Edward J. Kearney in a special way may send a contribution to a Memorial Scholarship Fund to be established in Edward’s name at St. Gregory’s School, 121 Old Niskayuna Road, Loudonville, NY 12211, or The Academy of the Holy Names Scholarship Fund, 1075 New Scotland Ave., Albany, NY 12208, or Michael J. Fox Foundation for Parkinson’s Research. To leave a special message for the family, light a candle, obtain directions or view other helpful services please visit www.McveighFuneralHome.com

Loudonville-Edward J. Kearney, 76, entered Eternal Life Friday, January 19, 2018 in the Hospice Inn at St. Peter&#8217;s Hospital. Born in Albany, he was the son of the late Edward and Marion Williams Kearney. Edward was a graduate of Vincentian... View Obituary & Service Information

The family of Edward J. Kearney created this Life Tributes page to make it easy to share your memories.

Send flowers to the Kearney family.