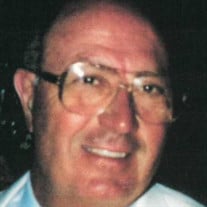 Albany – Edward J. DelVecchio, 91, of Clermont Street, Albany, NY, entered into eternal life on March 30, 2020, surrounded by his loving family. He was born on October 8, 1928, in Athens, NY, the son of the late Frank and Mary (Gabriele) DelVecchio. He was also predeceased by his brother George DelVecchio and baby sister Pasquelina DelVecchio. Edward met his beloved wife, Marjorie (Marafioti) DelVecchio, while both were in 8th grade. Their relationship began as friends and eventually blossomed into love. They were best friends and soulmates truly devoted to one another and were married for 69 years. Edward was also the loving father of Paul (Janet) DelVecchio, of Albany, and Jan (Thomas) Koenig, of Glenmont; cherished grandfather of Paul Michael DelVecchio of Albany, Lisa (Craig) Raymond of Latham, and Kara Koenig of Saratoga Springs. He is also survived by several nephews, nieces and cousins. Edward enjoyed spending time with his children and grandchildren and was proud of their accomplishments. Edward learned early on the ethics of hard work having worked with his family’s mushroom business in the summer months, and their ice business during the winter months. He would get up each work day at 5 a.m. sawing slabs of ice into blocks from the Kaaterskill Creek in Catskill, NY to accommodate iceboxes as this was the only refrigeration at the time. This work ethic continued thoughout Edward’s academia and life’s work. He graduated from Siena College and continued his education graduating from Pace University with a degree in Business. While residing in Catskill, and keeping in touch with the local community, Edward became the President of the Junior Chamber of Commerce; a position he held for a few years. However, with ambition, a desire to succeed, and a college degree in hand, Edward and Marjorie, along with their young children, decided to move from the idyllic countryside of Catskill to Albany, NY for employment opportunities. Edward worked for a time at the Addressograph/Multigraph and then went to work at the Reuben H. Donnelly Company as an Account Executive. During his tenure there, Edward found his niche and became the Area Manager for the East Coast receiving several citations and recognition awards yearly for Top Account Executive ranking 99.9% accuracy in sales. Although very busy with his career, Edward was also conscious of giving back to the community and served as President of the Lions Club heading up the annual pancake breakfasts and fundraising efforts for the blind. In the early 1970’s, Edward and Marjorie took up the game of golf and became members of the Pinehaven Country Club and then Wolferts Roost. It was a time that they formed many friendships that endured throughout their lives, and enjoying many years of golf and social events at Wolferts Roost. When Edward retired in 1986, new opportunities arose. He and Marjorie traveled twice to Europe and Aruba as well as travelling to the Bahamas and Las Vegas. It also became the time that Edward and Marjorie began spending their winters at their condominium at Vista Royale in Vero Beach, FL. Over the next 30 years, they enjoyed playing golf, socializing with old friends, making new acquaintances, and simply enjoying what life had to offer. They continued spending their winters in Florida until Edward’s illness in the summer of 2015 prevented them from traveling, thus making the decision to permanently remain at their home in Albany. In his later years, Edward enjoyed reading, watching the NY Yankees and spending time with family. Edward will be remembered for his loyalty, integrity and his love for his family and friends as well as his firm handshake, bear hugs and beautiful smile. He was a man of tall stature, but was a gentle soul with a kind disposition and great sense of humor. He will be sorely missed by all who loved and knew him. The family would like to extend their thanks to the staff, doctors and nurses at Our Lady of Mercy Life Care Center in Guilderland for their care, compassion and concern while tending to Edward’s needs over the last several months. Family and friends are invited to a visitation service celebrating Edward’s life on Saturday, August 14, 2021 from 11 a.m. to 12 p.m. followed by a Memorial Service at the McVeigh Funeral Home, 208 North Allen Street, Albany. All are welcome. Please only enter the funeral home from the rear parking lot doorway; and unvaccinated individuals must wear a mask and practice social distancing. Those who wish, may make a contribution in Edward’s memory to a charity of one’s choice. To leave a message for the family, please visit McVeighFuneralHome.com

The family of Edward J. DelVecchio created this Life Tributes page to make it easy to share your memories.

Send flowers to the DelVecchio family.