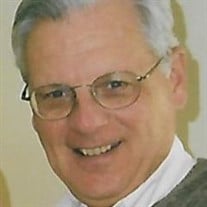 Albany-Edward R. Delehanty, Jr. 81 of Albany NY passed away peacefully on December 8th, 2019, surrounded by his beloved family after a brave battle with gastric cancer. Ed was the dear husband of Michele Ann Tanney for 52 years. Ed was born on April 20, 1938 to the late Edward R., Sr. and Helen Conroy Delehanty. A lifelong resident of Albany area, Ed was a graduate of St. Patrick’s Institute and Christian Brothers Academy, Class of 1955. Ed worked for the State of New York beginning with the NYS Department of Commerce, NYS Office of Planning Services and retiring in 1994 from the Department of Transportation as Supervisor of Contract Payments. Upon retiring, Ed was a regional driver for Enterprise-Rent-A-Car, a job he thoroughly enjoyed. Ed served his country in the National Guard 210th Army Battalion of the 27th Armor Division as a medic, retiring with the rank of Staff Sargent. He was a member of the Bucci-McTague Post 1530. An avid bowler for many years, Ed bowled two 300 games and was a member of two Albany City League Champion teams. In his later years he loved bowling in the WAIBS league with his sons. He was a longtime Siena basketball fan and an avid follower of Notre Dame football and the Boston Red Sox, a love he passed on to his boys. Ed loved the game of baseball and was proud to pass that love onto his two sons. He managed and coached them from T-ball, to Little League to Babe Ruth. He always told them after a loss, “It’s only a game guys, there will always be another one”. He was a former Chairman of Albany County American Legion baseball and a co-founder of the West End Little League. Ed was a longtime member of the Albany Twilight League, serving as President and Chairman of the League’s Board of Commissioners. He was inducted into the Twilight League Hall of Fame and recipient of the President’s Award. He was also a co-founder of the Albany Twilight League Veteran’s Association. He also was the recipient of the 1995 Achievement Award for Conspicuous Service to Amateur Baseball and to The Upper NY State Amateur Baseball Association. Ed’s pride and joy came with the arrival of his twin grandchildren, Megan and Bryan, Jr. Poppy loved seeing them participate in their school and sporting activities. They were the lights of his life. His happiest times with his family were trips to Disney World, his happy place. He loved his four-legged canine pets, Bree, Cristy, Trouble and lastly, Oliver, who he walked many miles with at the Crossings in Colonie. Ed is survived by his wife, Michele, sons, Bryan Sr. and his wife Natasha and their children, Megan and Bryan, Jr., Craig and his wife Cori, his sister, Jeanne (Michael) Sullivan, brother-in-law John DiNuzzo, also his brother-in-law, Terry (Diann) Tanney, and sisters-in-law, Beth (Philip Occhino) Musella and M. Kim (the late William) Fitzpatrick. He is also survived by several nieces and nephews and grandnieces and a grandnephew and many cousins and friends who he loved dearly. He was predeceased by his parents, Edward R., Sr. and Helen Conroy Delehanty, his sister, Maureen DiNuzzo, and in-laws, Terence and Ruth Tanney. Ed and Michele would like to thank their family and friends for their overwhelming love and support through Ed’s illness, especially his lifelong friend and walking buddy, Will Klose, Jr. We could not have done it without you. A special thank you to our daughter-in-law, Natasha Delehanty, for being our advocate on this journey. To my sister, Kim, without her I could not have cared for Ed at home. She went above and beyond and I am so grateful to her. Relatives and friends are invited to visit with Ed’s family Thursday, December 12, 2019 4:00 pm to 7:00 pm at McVeigh Funeral Home, 208 North Allen Street, Albany, NY 12206. Funeral services Friday, December 13, 2019 at 9:15 am at McVeigh Funeral Home, Albany, NY thence to Christ Our Light Catholic Church, Loudonville, NY at 10:00 am where his Funeral Mass will be celebrated. The Rite of Committal will be held at St. Agnes Cemetery, Menands, NY immediately following the Funeral Mass. To leave a message for the family, light a virtual candle, obtain directions or view other helpful services please visit www.McveighFuneralHome.com In lieu of flowers, donations are requested in Ed’s memory to The 22Q Family Foundation, www.22qfamilyfoundation.org or mail checks to The 22Q Family Foundation, 725 Clubhouse Drive, Aptos, Ca. 95003

Albany-Edward R. Delehanty, Jr. 81 of Albany NY passed away peacefully on December 8th, 2019, surrounded by his beloved family after a brave battle with gastric cancer. Ed was the dear husband of Michele Ann Tanney for 52 years. Ed was born... View Obituary & Service Information

The family of Edward R. Delehanty Jr. created this Life Tributes page to make it easy to share your memories.

Send flowers to the Delehanty family.