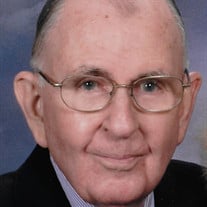 Albany, N.Y. – Edward Thomas Cavanagh Sr. 91 died suddenly on June 26, 2018 from complications following a fall. Born November 23, 1926 in Brady Maternity Hospital, Albany to the late Thomas Augustus Cavanagh and Florence Bucci, Edward was a proud life-long resident of Albany. He graduated from Vincentian grade school and Christian Brothers Academy. Following high school he enlisted in the US Navy at the age of 17 against his mother’s wishes. He served on the U.S.S. Caperton (DD-650) during WWII, which was engaged in combat operations in the Philippines, Okinawa and the final assault on Japan. Upon his return from service, he graduated from Siena College on the GI Bill with a degree in English/Journalism. He began his career at the US Civil Service Commission and completed his 32 year working career with the US Department of Labor. In 1953 Edward met the love of his life, the late Helen Bartlett Cavanagh, and married her on November 13, 1954. They shared 60 wonderful years together and were immensely proud of their four children and four grandchildren. Edward was a quiet and private person with a dry sense of humor who entertained us with his Irish wit up until the day he died. He loved his family more than anything else and was always there for them whenever anyone needed anything. He enjoyed a well-aged scotch and a good snifter of brandy and never missed completing the crossword puzzle in the daily paper. He thoroughly enjoyed his retirement years and joined Helen in their passion for genealogy. Edward’s crowning achievement was the publication of a comprehensive book he composed himself on his family genealogy, which included extensive biographies, photos, and folklore of all his relatives. Edward and Helen were also known for their annual New Year’s Eve parties where Edward used his photography skills to create humorous pictures of all of their guests posed along side famous stars and celebrities, long before the days of Photoshop. In their later years Edward and Helen doted on their four grandchildren and enjoyed attending all their various activities. Ed was also an avid Yankees and Giants fan. Ed and Helen were grateful for all the friendships they made with residents and staff during the last 12 years at the Avila Retirement Community. Edward is survived by his daughters Maureen, Linda, Carol (Joseph O’Connor) of Albany and his son Edward Jr (Donna Tozzi) of Norristown, PA. He is also survived by grandchildren Daniel, Erin (fiancé Michael Hogan) and Laura O’Connor of Albany and Coleen (Joseph Kozlowski) of Malvern, PA., nephew Robert Sleasman (Rich Ostreicher), niece Nancy Laurin (Gregory), and sister-in-law Dorothy Sleasman. He was pre-deceased by his loving wife Helen Bartlett Cavanagh (June 27, 2014). Relatives and friends are invited to visit with his family Thursday, June 28, 2018 4:00 pm to 7:00 pm in McVeigh Funeral Home, 208 North Allen Street, Albany, NY Funeral services Friday, June 29, 2018 at 8:15 am in McVeigh Funeral Home, Albany thence to All Saints Catholic Church, Albany at 9:00 am where his Funeral Mass will be celebrated. The Rite of Committal will be held in St. Agnes Cemetery, Menands. Donations may be made to All Saints Catholic Academy, 10 Rosemont St. Albany, NY. 12203. To leave a message for the family, light a candle obtain directions or view other helpful services please visit www.McveighFuneralHome.com

The family of Edward T. Cavanagh created this Life Tributes page to make it easy to share your memories.

Send flowers to the Cavanagh family.