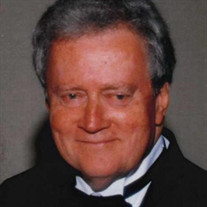 Albany-Albany - E. David Duncan passed away November 1, 2021. He was born on November 9, 1934, in Albany, the son of Edward J. and Mary N. Duncan. He attended and graduated from Blessed Sacrament School, Vincentian Institute, Siena College and Albany Law School. After passing the New York State Bar Exam, he attended Naval Officers Candidate School in Newport, Rhode Island, and was then assigned as a legal officer to the USS Hancock, an Aircraft Carrier, in the Pacific Theatre, serving on it and also in shore duty, at North Island Naval Station in Coronado, California, during the Cold War, from 1960-1962. It was in Coronado that he met Kay Kennedy, from Coon Rapids, Iowa, who was teaching school there. They were married on February 24, 1962 at Sacred Heart Church in Coronado, and later that year moved to Albany where they began their family. Upon returning to Albany, he entered into the practice of law with his uncle Charles “Chick” Duncan, at which he made his living for the next fifty years at offices on Albany’s State Street. A lifelong member of the Democratic Party, he soon joined the Albany County Democratic Committee as a committeeman. In 1967, he was elected to the first Albany County Legislature, serving with distinction in that body through 1979. In 1982 he served as the President of the Albany County Bar Association. In 1983 he was appointed to the Albany City Court bench where he presided until 2004. As a part-time City Court Judge he was able to continue with his private law practice. He spent the last 10 years of his legal career practicing law with his daughter Sara. Dave was the plaintiffs’ attorney in Boomer v. Atlantic Cement Company which according to the Albany County Bar Association was one of the most significant civil cases originating in Albany County in the 20th century. Boomer is taught in law schools throughout the country and holds the distinction of being the only case routinely taught to first-year law students in three separate courses-property, torts and civil procedure. Dave was known for his sense of humor and outgoing personality. He treated everyone the same regardless of job title. He had an incredibly optimistic attitude towards life, he always saw the glass as half-full. Dave enjoyed a good time, telling stories and singing songs, especially Irish songs-It’s a Long Way to Tipperary was one of his favorites. He enjoyed spending time with his family and watching “the New York Football Giants” as he called them, as well as reading history, literature, playing squash (at the University Club of Albany- of which he was an active member for many years) and trout fishing (with dry flies) in the AuSable River in the Adirondacks and in Kinderhook Creek. Other favorite vacation spots over the years included Chatham, Massachusetts, on Cape Cod. He also enjoyed his daily 3-mile walks on New Scotland Avenue which he was well known for. He was proud of his Irish roots, visiting Ireland in 1972 and 2005 with his wife Kay, and avidly following news from there over the years. Every year he marched in the North Albany St. Patrick’s Day Parade until his health prevented him from doing so. Dave was a devout catholic. He was a parishioner of St. Catherine of Siena/Mater Christi parish since 1962. For years he served as an usher at the 11:30 am Mass on Sunday mornings. He is survived by his wife Kay, his children Jason, Mark, Ed and Sara Duncan, his daughters-in-law Amy, Pam, and Maryann Duncan and son-in-law Daniel Bergin. He is also survived by his grandchildren Heather and Kaelin Duncan, Patrick and Brendan Bergin, Nicholas and Emily Duncan and Leo and Jack Duncan. Relatives and friends are invited to visit with Dave’s family Friday, November 5, 2021 4:00 pm to 7:00 pm at the McVeigh Funeral Home, 208 North Allen Street, Albany, NY 12206. Please only enter the funeral home from the rear parking lot entrance. The Duncan family respectively request everyone wear a mask attending the visitation and the Funeral Mass. Funeral services Saturday, November 6, 2021 at 11:00 am at the Parish of Mater Christi, Albany where his Funeral Mass will be celebrated. Masks are required. The Funeral Mass can be viewed at YouTube.com/C.ParishofMaterChristi The Rite of Committal will follow at St. Agnes Cemetery, Menands, NY immediately following the Mass. To leave the family a special message please visit www.McveighFuneralHome.com

The family of Hon. E. David Duncan created this Life Tributes page to make it easy to share your memories.

Send flowers to the Duncan family.