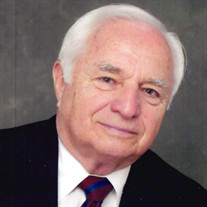 Albany – Dr. John F. Rymanowski , 94, of Loudonville and St. Maarten, N.A. entered Eternal Life Sunday, December 13, 2020 after a brief illness. Dr. Rymanowski, originally from Cohoes, was the son of the late Mr. John and Anna Tush Rymanowski. John was a practicing Dentist in Cohoes for over 35 years. He retired in 1992. Since then he had a limited practice in Geriatric Dentistry in Loudonville and devoted time to The Albany Green Street Clinic and the Fort Edward Dental Clinic, both for the poor and neglected. Dr. Rymanowski was a graduate of Cohoes High School, and received his pre-dental education at both R.P.I. and Russell Sage College after his tour of duty in World War 2. He also attended Siena and Brooklyn Academy. He graduated from the Faculty of Dentistry at McGill and the Montreal General Hospital Dental Clinic. He was a member of the American Dental Association, The Dental Society of the State of New York and the Troy Dental Study Club where he was a past President. In addition, he was a member of the Society of Geriatric Dentist and in 1995 was awarded a “Recognition of High Achievement from the Academy of Dentistry for the Handicapped.” Dr. Rymanowski was, in his teens, an accomplished violinist having played with the Albany and Schenectady Symphony Orchestras. John was a longtime communicant of St. Pius X Church in Loudonville where he also served as an usher. He was a Knight of Malta, a Knight of Columbus, a life member of the Catholic Actors Guild, a member of the Country Club of Troy for over 50 years, and past member of the Associated Board of Trustees of Siena College. John was an avid golfer and spent many weekends at golf resorts around the country. He also held a Black Belt in both Japanese and Okinawan Karate. John and his wife enjoyed traveling. They spent many summers in Europe, including Italy, France, Switzerland, Spain and the Netherlands. During World War 2, he served in the Naval Air Corp as a Combat Aircrewman in a Torpedo and Dive Bomber Squadron. John was a devoted husband and loyal friend. He will be remembered for his dry wit and gentlemanly manner. He is survived by his beloved wife of 62 years, the former C. Nadia Spiak, and a brother, Dr. Edward Rymanowski, of Marbella, Spain and Naples, FL., as well as his Godchild and cousin Helen Knickerbocker, and cousin Val Rymanowski. Funeral services Monday, December 21, 2020 at 11:00 am at St. Pius X Church, Loudonville, NY where his Funeral Mass will be celebrated. Please only enter the church from the main doorway masks and social distancing are required; church ambassadors will be available to help with seating and questions; and please attempt to arrive by 10:45 am. The Rite of Committal will be held at St. Agnes Cemetery immediately following the Funeral Mass. To leave a message for the family please visit www.McveighFuneralHome.com Those wishing to remember Dr. John F. Rymanowski in a special way may send a contribution to St. Jude Children’s Research Hospital, 501 St. Jude Place, Memphis, TN 38105.

The family of Dr. John F. Rymanowski created this Life Tributes page to make it easy to share your memories.

Send flowers to the Rymanowski family.