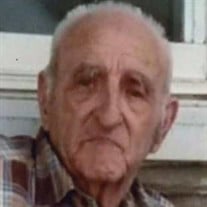 Guilderland- Having passed through his good life on Earth, Donald R. Provost, age 88, is now embracing his beloved wife Pat in eternity. They were reunited Thursday, May 24, 2018 as he passed away at home with his loving family by his side. Born in Plattsburgh, NY March 23, 1930, he was the son of the late Edgar and Lucy Maurice Provost. Don married in 1951, before enlisting with the US Army. Don served with the Army from 1951-1953 while stationed in Germany. He also served with the Army Reserve from 1953-1957. After being honorably discharged, Don moved to Guilderland where he raised a family. Don worked for G.E. Wasserman’s meat packing, Tobin meat packing, and Save-Way Market before retiring in 1991 from the Guilderland Highway Department as an operator. Don loved his family deeply, he was a friendly man who delighted in conversation with family and friends. He would spend hours talking to anyone, often found with a beer in his hand. He enjoyed his dog “Spike”, while watching his favorite shows. He was a cheering fan of the NY Yankees. In his younger days of life, his greatest joy was driving to the landfill, where he would find awesome treasures. He also enjoyed camping, hunting, and bowling. He was the best dad in the world, who will be always remembered for his kindness and spirit. His loss will be deeply felt by all who knew him. Don wed Patricia (Pat) Denschler in Plattsburgh, NY and thereafter became a loving and devoted couple of 47 years before her death in 1998. Don is the cherished father of Donald A. Provost (Marie) of Guilderland, Shirley Valletta (John) of Guilderland, and Michael Provost (Cheryl) of Rotterdam; grandfather of Tammy Provost (Eric Taber), Thomas (TJ) Valletta, Jeffrey Valletta (Alycia Smith), Nicole Funk (Tom), Douglas Provost (Jennifer Reedy), Max Provost, and Zachary Provost; great-grandfather of Kalyn Taber, EJ Taber, Ryan Provost, Anthony Merrill, Evan Merrill, Kristin Smith, Jaden Smith, Wade Funk, and Taylor Funk; brother of Arnold “Petty” Provost (Pauline) of West Chazy, and Mark “Spud” Finnell (Jeannie) of Cadyville; brother in law of Shirley Provost, Elizabeth (Betty) Provost, Francis “Sonny” Garney (late Grace), and dear friend of Capian Kelley. Also survived by many nieces and nephews. In addition to his parents and wife, he is predeceased by his brothers Lee Provost (Pauline), Elmer Provost (Grace), Roy “Nippy” Provost, and Edward “Dubby” Provost, his sisters Geraldine Martineau (Alfred) and Inez Pelkey (Ray), his sister in law Evelyn Daniels, his brother in law Clarence Garney (Marion), and his step father Dennis “Denny” Finnel. In lieu of flowers, memorial contributions may be made in Donald’s memory to the Albany Medical Children’s Hospital, American Cancer Society, Animal Protective Foundations, Steve Caporizzo’s Pet Connection, or the Guilderland Animal Shelter. Relatives and friends are invited and may visit with Donald’s family on Tuesday, May 29, 2018 from 4:00 to 7:00 pm in the McVeigh Funeral Home, 208 North Allen Street, Albany. Funeral services will be on Wednesday, May 30, 2018 at 9:00 am from McVeigh Funeral Home, thence to St. Madeleine Sophie Church, Guilderland at 10:00 am where his Funeral Mass will be celebrated. The Rite of Interment will immediately follow the Mass at Sts. Cyril and Method Cemetery, Rotterdam. To leave Donald’s family a message on their guestbook, light a candle, obtain directions, or view other helpful services, please visit www.mcveighfuneralhome.com

Guilderland- Having passed through his good life on Earth, Donald R. Provost, age 88, is now embracing his beloved wife Pat in eternity. They were reunited Thursday, May 24, 2018 as he passed away at home with his loving family by his side. Born... View Obituary & Service Information

The family of Donald R. Provost created this Life Tributes page to make it easy to share your memories.

Guilderland- Having passed through his good life on Earth, Donald...

Send flowers to the Provost family.