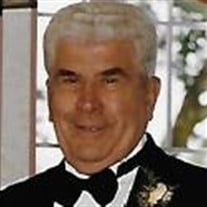 Loudonville-Dominic L. Maimone, 95, entered Eternal Life Monday, October 16, 2017 at Daughters of Sarah Nursing Facility. Born in Albany, he was the son of John and Nancy Crisafulli Maimone. Dominic was a US Army, WW II veteran serving in the European Theater. He was a graduate of Roessleville High School. He retired as a salesman after 25 years of employment at Montgomery Wards, Menands. Dominic was a 43 year member of the Colonie Elks, and belonged to the American Legion for over 54 years, currently with the Joseph E. Zaloga American Legion Post. He greatly enjoyed golfing and gardening. He was the dear husband of the late Margaret Tholl Maimone; beloved father of Patricia Margiotta, Nancy Lovett (Bruce), and Paul Maimone; cherished grandfather of Michele May (Charles), James Lovett (Bonnie), Victoria Lovett, Jennifer Maimone and Michael Maimone; brother in law of Betty Anne Hart; brother of the late Rose Catalfamo, Sara Ricciardi, Grace Sole, Santa Franze, Samuel Maimone and Angelo Maimone; survived by 3 great grandchildren and several nieces and nephews. The family would like to express a heartfelt thank you to the staff of the Gold Wing at the Daughters of Sarah for the wonderful care and compassion shown to Dominic. Relatives and friends are invited to visit with Dominic’s family Thursday, October 19, 2017 4:00 to 7:00 pm in the McVeigh Funeral Home, 208 North Allen Street, Albany, NY. Funeral services Friday, October 20, 2017 at 9:30 am in McVeigh Funeral Home, Albany thence to Christ Our Light Catholic Church, Loudonville at 10:00 am where his Funeral Mass will be celebrated. The Rite of Committal will be held in Our Lady of Angels Cemetery immediately following the Mass. Although flowers are incredibly thoughtful, the family ask you to consider making a donation in Dom’s memory to either Christ Our Light Catholic Church, 1 Maria Drive, Loudonville, NY 12211 or NYS Troopers PBA Signal 30 Benefit Fund, 120 State Street, 2nd Floor, Albany, NY 12207. To leave a message for the family, please visit www.McveighFuneralHome.com

The family of Dominic L. Maimone created this Life Tributes page to make it easy to share your memories.

Send flowers to the Maimone family.