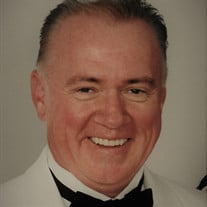 Delmar-Daniel J. Dugan II, 74, passed away peacefully on Monday, August 20, 2018 surrounded by his loving family. Born in Albany, he was predeceased by his parents Ellen Kirwan and William Steele Dugan, and his brother, William Steele Dugan Jr. He was a 1961 graduate of Vincentian Institute and a 1965 graduate of Siena College. He earned his Master's Degree in Accounting at the State University of New York at Albany. Dan was a Management Consultant for KPMG working in the Dallas, NYC and Albany offices. He later joined the Dormitory Authority of the State of New York as Chief Financial Officer until his retirement. Dan was past President of the Board, Foundation of St. Catherine's Center for Children. To his friends and strangers alike, Dan was generous of heart and always willing to lend a helping hand. He was known as a great storyteller with an Irish wit. In later years, Dan rarely missed a luncheon at the Ancient Order of Hibernians (AOH) Hall. He was a steadfast and lifelong Giants fan and thoroughly enjoyed attending games with his grandsons. Dan also loved golf and fondly recalled the golf trips he took to Ireland and Scotland with his brother Neil. He is survived by his devoted wife of 52 years, Jeanne Duclos Dugan. He is also survived by his beloved daughters, Elaine (Sean) Perkins of Arlington, Virginia and Alicia (Michael) Lasch of Loudonville, New York as well as his cherished grandchildren - Jack, Connor and Liam Perkins and William, Christian and Alexandra Lasch - who knew him as "Shanny" (Seanathair - old father in Gaelic). Dan is also survived by his sisters Mary Ellen (Gerard) Deighan and Elizabeth (Anthony) Potenza, brother Cornelius (Mary) Dugan, nephew Anthony D. Potenza and nieces Caitlin (Thierry) Bertin - Mahieux and Ellen Potenza. The family would like to thank the staff at St. Peter’s Hospital and the Hospice Inn for their warm and attentive care of Dan during the last couple of weeks. Relatives and friends are invited to visit with Daniel’s family Thursday, August 23, 2018 4:00 pm to 7:00 pm in McVeigh Funeral Home, 208 North Allen Street, Albany, NY 12206. Funeral services Friday, August 24, 2018 at 9:30 am in St. Thomas the Apostle Church, Delmar, NY where his Funeral Mass will be celebrated. The Rite of Committal will be held in Our Lady of Angels Cemetery immediately following the Funeral Mass. To leave a message for the family, light a candle, obtain directions or view other helpful services please visit www.McveighFuneralHome.com In lieu of flowers, those who wish may send memorial contributions to The Community Hospice Foundation 310 South Manning Boulevard, Albany, N.Y. 12208 or (518) 482-4433 or www.givecommunityhospice.org.

Delmar-Daniel J. Dugan II, 74, passed away peacefully on Monday, August 20, 2018 surrounded by his loving family. Born in Albany, he was predeceased by his parents Ellen Kirwan and William Steele Dugan, and his brother, William Steele Dugan... View Obituary & Service Information

The family of Daniel J. Dugan II created this Life Tributes page to make it easy to share your memories.

Send flowers to the Dugan family.