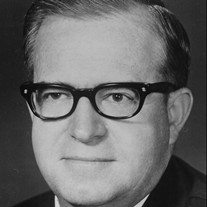 Clifton Park-Charles G. Wolz, Jr., 95, went to be with his Lord on September 9, 2017 at Schuyler Ridge Nursing Home in Clifton Park, NY. Born in the Bronx, New York City, he was the son of the late Charles and Carrie Wolz. He graduated from Concordia Jr. College in Westchester County; received his B.A. from Columbia College, NYC; an M.A. from Teachers College, Columbia University and an M.P.A. from the Maxwell School, Syracuse University. Charles served as a medical technician during WWII while stationed at Walter Reed Hospital, Washington D.C, as well as with the Medical Clearing Company in Japan and in the Philippines. He received an honorable discharge as a Sergeant in 1946. Charles began an illustrious 35 year career with the NYS Civil Service Dept. which began in 1948. As Director of Recruitment and Examination he was instrumental in many innovative improvements in the NYS Merit System Programs. Among some of those major contributions he: developed and expanded a dynamic nationwide college recruitment program; directed the first large scale multi-level promotion examination for a NYS agency; used video tape instead of written descriptions when conducting administrative oral exams; instituted a computerized eligibility list for appointments; secured grant funds from the Ford Foundation to develop bilingual recruitment literature and established a “hot line” for the blind and visually handicapped regarding the availability of state jobs and civil service examinations. While serving in the capacity of Director of Health Insurance, he directed the redesign and improvement of the Major Medical Claim system. In addition, he received recognition by the National Red Cross for the establishment of the Employee Blood Credit Program. Mr. Wolz was a member of AARP, the Elks, Masons, American Legion, Veterans of Foreign Wars, the former Aurania Club in Albany, Phillips Travel Agency, and he volunteered at Albany Memorial Hospital. He was a past member of the Third Reformed Church and of the West End Presbyterian Church in Albany, and attended the Prince of Peace Lutheran Church in Clifton Park, where he was a member of the bowling team. Charles was the dear husband of Gloria R. Wolz, who predeceased him; beloved father of Barbara Matson (Barry) of Clifton Park and Charles H. Wolz (Maribeth) who predeceased his father; dear grandfather of Melinda Lopatniuk (Edward), Robert LIndquist (Laura); Charles Wolz; Sarah Matson Paggi (Tim) and Eric Matson; and dear great-grandfather of Eden Lopatniuk, and Noah and Julia Lindquist. Charles will be remembered for his gregarious sense of humor, in addition to his many musical and entertaining talents, and unique expertise for planning retirement parties and AARP trips. He enjoyed his many outings at the nursing home, especially when they involved eating out at local restaurants. Many thanks should be given to the nursing home staff, particularly in the Clifton Hills unit, with special gratitude to Rose. Relatives and friends are invited to visit with Charles’s family Tuesday, September 12, 2017 4:00 pm to 7:00 pm in McVeigh Funeral Home, 208 North Allen Street, Albany, NY Funeral services Wednesday, September 13, 2017 at 11:00 am in McVeigh Funeral Home, Albany. The interment at Memory Gardens Cemetery will immediately follow the service. Those wishing to remember Charles may send a contribution to the Veteran’s Miracle Center, 10 Interstate Ave., Albany, NY 12205, or donate at http://www.vmcalbany.org To leave a message for the family, please visit www.McveighFuneralHome.com

Clifton Park-Charles G. Wolz, Jr., 95, went to be with his Lord on September 9, 2017 at Schuyler Ridge Nursing Home in Clifton Park, NY. Born in the Bronx, New York City, he was the son of the late Charles and Carrie Wolz. He graduated from... View Obituary & Service Information

The family of Charles G. Wolz Jr created this Life Tributes page to make it easy to share your memories.

Send flowers to the Wolz family.