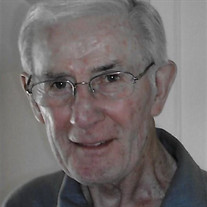 Colonie - Charles J. Kelly, 85 of Albany died Wednesday, September 18, 2019 in Hospice after a brief illness. Born in Pleasantdale, NY on October 27,1933 to the late James A. and Mary Elsie McArthur Kelly. Chuck retired from National Grid after 38 years of loyal service. He was a proud Veteran of the US NAVY having served in Korea from 1950-1954. He was a member of the North Albany America Legion Post #1610 for over 60 years. It was his wish that he and his 6 brothers Military flags were hung together in South Troy where they grew up and thank you to the Troy Military Banners for all of their help. He was predeceased by his son, Paul Kelly in 2015 and his daughter Nancy Kocher in 2016 (Lt. Col. USMC Ret. Patrick Sivigny), his siblings Edward, James, Francis, William, Donald, Robert, George, Elsie, Helen and Irene. He is survived by his daughter Joyce (Steven) Feeley of Schodack, his son, Mark Kelly of Florida, his sister Joan (Tom) Greeley of Rensselaer, his daughter in law Deirdre Kelly of Virginia, his loving companion Maryellen Browarski of Colonie. He was a proud grandfather to Elizabeth Feeley (Dev Bissram) of New York City, Matthew Feeley of Glenville, Nicholas Feeley of Schodack and Andrew Kelly of Virginia. Along with many nieces and nephews. The family would like to thank all the wonderful staff at St. Peters Hospital and the Hospice Inn. Anyone wishing to remember Chuck can make a donation to St. Jude's Children's Hospital, PO BOX 1000, Dept 142, Memphis, TN 38148-0142. Relatives and friends are invited to visit with Chuck’s family Monday, September 23, 2019 4:00 pm to 7:00 pm at McVeigh Funeral Home, 208 North Allen Street, Albany, NY 12206 Funeral services Tuesday, September 24, 2019 at 8:15 am at McVeigh Funeral Home, Albany thence to St. Joseph Church, South Troy, NY at 9:30 am where his Funeral Mass will be celebrated. The Rite of Committal will be held at the Gerald BH Solomon Saratoga National Cemetery at 12:30 pm following the Funeral Mass. To leave a message for the family, please visit www.McveighFuneralHome.com

The family of Charles J. Kelly created this Life Tributes page to make it easy to share your memories.

Send flowers to the Kelly family.