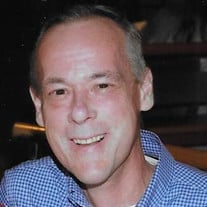 Albany-Brian Howard Harple, 49, passed away Monday, April 10, 2017 at St. Peter’s Hospital with his loving family by his side. Brian was born March 23, 1968, the son of Richard Harple and the late Marlene Mattice Harple in Albany. He graduated from Ravena-Coeymans-Selkirk High School. He attended the University at Albany where he earned a Master’s of Business Administration degree. On September 1, 1995 Brian was joined in marriage with Maria T. Testa. During their 22 years of marriage, they raised their four children on a foundation built with faith, love and strength. Brian was diagnosed with Acute Myeloid Leukemia in 2005. Through many years of his battle and survival of cancer, Brian ultimately succumbed to the complications of graft-versus-host disease (GVHD). He was employed at the New York State Teacher’s Retirement System, where he worked for over 20 years. He was a board member of Albany Babe Ruth, and the National Little League, where he received Volunteer of the Year Award. He is survived by his loving wife, Maria, and their four children, Marissa (Mazzei) Izykowski and her husband Matthew of Ballston Spa, Christopher Mazzei, Congetta Harple, and Richard Harple, all of Albany. Brian was overjoyed and looking forward to welcoming his first grandchild expected in August of this year. He also leaves behind his cherished mother-in-law, Marie Testa; sister and brother-in-law, Kimberley and John Tunney; sister and brothers-in-law, Regina Conboy and Michael Vadney, Julia and Anthony Elacqua, and Fred Testa; as well as many nieces and nephews. Brian is predeceased by his father-in-law, Albino Testa; aunt, Bonnie Gransbury; uncle, Warren Harple; and nephew Anthony J. Elacqua. The family would like to express their gratitude to Sister Eleanor Guerin, Dr. Louis Gold, Dr. Paresh Maine, Dr. Thomas Schumacher, and Dr. Robert Soiffer of Dana-Faber Cancer Institute for all their compassionate care and guidance during Brian’s illness. Relatives and friends are invited to visit with Brian’s family Tuesday, April 11, 2017 4:00 pm to 7:00 pm in McVeigh Funeral Home, 208 North Allen Street, Albany. Funeral services Wednesday, April 12, 2017 at 2:00 pm in St. Vincent De Paul Church, Albany where his Funeral Mass will be celebrated. In lieu of flowers please consider contributions in memory of Brian to Food Pantry’s of the Capital Region. To leave a message for the family, light a candle, obtain directions or view other helpful services please visit www.McveighFuneralHome.com

Albany-Brian Howard Harple, 49, passed away Monday, April 10, 2017 at St. Peter&#8217;s Hospital with his loving family by his side. Brian was born March 23, 1968, the son of Richard Harple and the late Marlene Mattice Harple in Albany. He... View Obituary & Service Information

The family of Brian Harple created this Life Tributes page to make it easy to share your memories.

Send flowers to the Harple family.