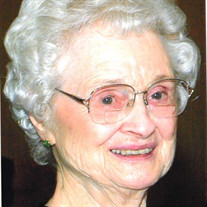 Troy- Arlene Simmons DeLange passed away on July 9, 2020. The daughter of Orrin and Florence Hubbard Simmons, Arlene was born on the family farm in Eagle Harbor, Orleans County, New York, on May 25, 1916. She married James C. DeLange on August 10, 1939 and they had many wonderful years together until his death in 1984. Arlene celebrated her 100th birthday at Atria Assisted Living Center in Albany with a party in which Mayor Kathy Sheehan presented her with a proclamation naming May 25, 2016 as “Arlene DeLange Day” in the City of Albany. She received a State Senate resolution from Senator Neil Breslin, and letters of congratulations from Congressman Paul Tonko, Governor Andrew Cuomo, New York State Comptroller Thomas DiNapoli and President and Mrs. Barack Obama. She was featured on the Smucker’s label on the Today Show. Family from around the country celebrated with a brunch to mark the occasion. Arlene graduated from Lockport High School and attended Buffalo State College. She served for many years as secretary to the principal of the Olcott Elementary School in the Newfane Central School District. She served as a Girl Scout and Brownie Leader, a Sunday school teacher, choir, and board member of the Newfane Methodist Church. She was an excellent baker, winning the Niagara County Apple Pie Baking Contest. She taught sewing classes at the Niagara County Cooperative Extension in Lockport. She was the last surviving member of her bridge club, the “Jolly 8”, who were friends from high school and college. She loved to travel. She and Jim were fortunate to visit Australia, New Zealand, England, and many areas of the United States. She leaves behind her daughter, Lynne Cole and her husband, Paul, of Cohoes; daughter Donna Roberts and her husband Peter, of Smith Mountain Lake, Virginia; and son Martin and his wife, Meg, of Downingtown, Pennsylvania. She is also survived by grandchildren Dr. Emily Cole Bayer (Tom), Martin Cole (Linda), Matthew Roberts (Marietta), Dr. Jason Roberts (Lynn), Nathan DeLange and great grandchildren Sarah, Kevin and Jason Cole; Cassidy and Clark Bayer; Katy, Will, Zoe, Whitten, Hannah Kate and Mason Roberts. She is survived by several nieces and nephews. She was predeceased by her sister Carol Beakman, her brother Roland (Bud) Simmons and her grandson Ben Roberts. The family wishes to thank the staff at Coburg Village of Rexford and Atria Assisted Living Center for their many kindnesses that made her life there so enjoyable. They also want to thank the staff at Eddy Memorial Geriatric Center of Troy and the Community Hospice who made her last days comfortable and peaceful. A family burial service will be held at Cold Springs Cemetery in Lockport, New York, where she will be interred next to her husband, Jim, her parents, and grandmother. Remembrances in honor of Arlene can be made by a donation to the Northeastern Association of the Blind, 301 Washington Avenue, Albany, New York 12206 whose services helped her to overcome the challenges to her limited sight. To leave Arlene’s family a message on their guestbook, light a candle, or view other helpful services, please visit www.mcveighfuneralhome.com

Troy- Arlene Simmons DeLange passed away on July 9, 2020. The daughter of Orrin and Florence Hubbard Simmons, Arlene was born on the family farm in Eagle Harbor, Orleans County, New York, on May 25, 1916. She married James C. DeLange on August... View Obituary & Service Information

The family of Arlene Simmons DeLange created this Life Tributes page to make it easy to share your memories.

Send flowers to the DeLange family.