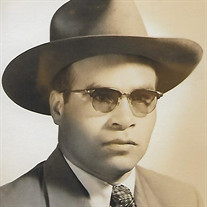 Albany- Antonio Medina was born in Cortazar, the state of Guanajuato, Mexico on September 27th, 1919, to the late Ignacio and Maria Rosario Medina. Growing up in rural Mexico, Antonio learned many facets of agriculture, and developed a deep appreciation and love of plants and flowers, which laid the foundation for his future gardening work in the United States. Antonio spoke often of the early days with his parents, four brothers and sister, with whom he remained close. Antonio was a devout Roman Catholic. He attended seminary school in early life, opting to serve the Lord as a lay person. While he did not have the benefit of a formal education beyond the early grades, he became an educated man through his own application and study of Latin, politics and the world at large. Friends and family, as well as his employers, often sought his counsel in matters both practical and spiritual; his wisdom was well-recognized. As a young man Antonio lived in Mexico city where he worked in law enforcement and met the love of his life, Hortencia Medina. He lawfully entered the United States in the late 1950s where he worked at a seminary's ranch in Las Cruces, New Mexico. He worked diligently to be able to bring his wife and young son from Mexico to the U.S., this time to Port Chester, N.Y., in 1960, a daughter Estela was born in that same year to the family. Antonio, also known as "Tony", lived the American dream of hard work and success. He worked for 20 years as a construction laborer with Cecio Brothers of Greenwich Ct., during which time he became a proud U.S. citizen. Known for his stamina and work ethic, he was beloved by all. He became an expert landscaper; his clients loved the beautiful gardens he created. At home, he created beautiful landscapes every season, from a dazzling array of spring tulips to evergreens festooned in Christmas lights. His tomatoes, peppers, and other vegetables were something to behold and taste. Once retired, the leisure time afforded was spent with his wife whom he adored, in the garden, or hosting his famous barbecues for extended family on summer days. He enjoyed dinners out and at home with his family, always ready to try a new Napa valley wine. He loved watching boxing matches and a highlight was a trip to Las Vegas for a championship match with his son and his wife. He also loved watching the Yankees on TV with an occasional trip to both the old and new stadium. A big treat for Dad was shaking Paul O'Neill's hand at a restaurant in Port Chester NY. Antonio's wise counsel, wry humour, and strength of will never be forgotten. His love and appreciation for all the things God has given us will be carried in our hearts forever. Antonio is pre-deceased by his beautiful wife Hortencia who passed to God's care on April 11th of this year. He is survived by his daughter Estela Medina, son in law Robert Grubin; son Joseph Medina, daughter in law Mariza Medina; granddaughters Melissa (married to Anthony Armijo), Rachel and Josephine; great granddaughters Azalea, Liatris, Leilani; great grandson Anthony Brian Armijo; he is also survived by several nieces and nephews. Funeral services Wednesday, May 15, 2019 at 10:30 am at McVeigh Funeral Home, 208 North Allen Street, Albany, NY 12206. Relatives and friends are invited to visit with Antonio’s family after 8:30 am on Wednesday at the funeral home. Interment will be held at Albany Rural Cemetery immediately following the funeral. Those wishing to remember Antonio Medina in a special way may send a contribution to Don Bosco Community Center, 22 Don Bosco Place, Port Chester, NY 10573. To leave a message for the family please visit www.McveighFuneralHome.com

Albany- Antonio Medina was born in Cortazar, the state of Guanajuato, Mexico on September 27th, 1919, to the late Ignacio and Maria Rosario Medina. Growing up in rural Mexico, Antonio learned many facets of agriculture, and developed a deep... View Obituary & Service Information

The family of Antonio G. Medina created this Life Tributes page to make it easy to share your memories.

Albany- Antonio Medina was born in Cortazar, the state of Guanajuato,...

Send flowers to the Medina family.