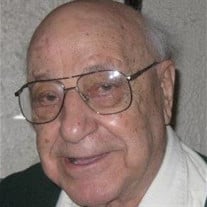 Albany-Anthony Margiotta, 96, entered Eternal Life Thursday, September 20, 2018 at Teresian House. Born in Albany, Anthony was the son of the late Peter and Rosemary Menonna Margiotta. Anthony was a proud US Navy, WWII veteran and was awarded the Distinguished Flying Cross and Permanent Citation after flying 35 combat missions. Anthony as a lifelong resident of Albany, and along with his brothers owned and operated Margiotta’s Barber Shop on Central Ave., a business started by their father in 1908. In 1958 Anthony and his brothers expanded the business establishing a second location in Westgate Shopping Center. Later the Margiottas established three more area locations. From 1990 until 2015 he served as the administrator of the Eastern Region New York State Barber Licensing Exam. He was a member of the American Legion, and enjoyed golfing and the New York Yankees. The Margiotta family would like to extend a heartfelt thank you to the staff at Teresian House, especially the First Floor Mount Carmel. Your kindness and care will always be remembered and held dear to us. Anthony was the husband of the late Ruth Wagner Margiotta, who predeceased him January 2005; father of Anthony Peter Margiotta and Mark Charles Margiotta (Tresa); grandfather of Tony Margiotta Jr (Janeen) and James Margiotta (Amber); great grandfather of Kaylee Margiotta, Deanna Margiotta and Joseph Margiotta; brother of the late Dominic Margiotta, Peter Margiotta and Rose Valente; survived by many nieces, nephews, cousins, and dear friends. Relatives and friends are invited to visit with Anthony’s family Sunday, September 23, 2018 4:00 pm to 7:00 pm in McVeigh Funeral Home, 208 North Allen Street, Albany, NY 12206. Funeral services Monday, September 24, 2018 at 10:15 am in McVeigh Funeral Home, Albany thence to the Infant of Prague Chapel at Teresian House at 11:00 am where his Funeral Mass will be celebrated. The Rite of Committal will be held at Our Lady of Angels Cemetery immediately following the Funeral Mass. To leave a message for the family please visit www.McveighFuneralHome.com

Albany-Anthony Margiotta, 96, entered Eternal Life Thursday, September 20, 2018 at Teresian House. Born in Albany, Anthony was the son of the late Peter and Rosemary Menonna Margiotta. Anthony was a proud US Navy, WWII veteran and was awarded... View Obituary & Service Information

The family of Anthony Margiotta created this Life Tributes page to make it easy to share your memories.

Send flowers to the Margiotta family.