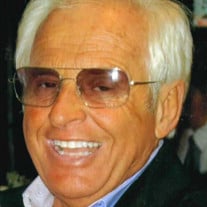 Loudonville-Carioto, Anthony J. Sr. “Tony”, 77, of Loudonville, N.Y. passed away peacefully at his home, surrounded by his loving family on Wednesday, April 15th. Tony fought a long and courageous battle with heart disease. Tony was born in Albany, N.Y. and was the son of the late Augustus and Josephine Carioto. Tony was a graduate from Christian Brothers Academy and Albany Business College. Tony’s father and uncles began the produce business in the 1930’s. After his father died in 1960, Tony and his brother Frank became the owners of Carioto Fruit Distributors. They tirelessly served produce to the Capital Region and beyond for over 40 years. Tony was a natural salesman and devoted most of his life to the success of the business. It has now been passed down to Tony’s sons, Anthony Jr. and Gregory. Most importantly, Tony was a family man. He enjoyed every minute he got to spend with them and was the most generous man on earth. He especially enjoyed spending time at his condo in Ft. Lauderdale, FL. Tony was always the life of the party and he touched many lives he met over the years. Tony had a strong faith in God. He was very religious and would attend Mass sometimes twice a day. He is survived by his wife of 49 years, Denise; sons Anthony (Kimberly), Gregory (Julie), and daughters Lisa Carney (Patrick), and Michelle Duggan (Steve); brother Joseph Carioto of Fort Meyers, FL; and a sister, Sister Miriam Anthony of Syracuse, NY. He was a beloved grandfather to 11 grandchildren; Hayden, Ava, Grace, Lauren and Anthony Carioto; Juliana, Olivia and Ella Carney; and Alexa, Ryan and Emma Duggan. He was also an uncle to many nieces and a nephew. The family would like to extend their thanks and gratitude to the many doctors and nurses that have helped Tony throughout the years. Funeral services will be held privately due to the current virus pandemic. Interment will be in Our Lady of Angels Cemetery. A Memorial Mass at St. Pius will be planned for a future date. In lieu of flowers, memorial contributions can be made to FAST (Foundation for Angelman Syndrome Therapeutics) P.O. Box 608 Downers Grove, Illinois 60515-0608 in honor of his granddaughter, Olivia Carney, who was the light of his life. To leave a message of condolence for the family, please visit www.LGfuneralhome.com

The family of Anthony J. Carioto, Sr. "Tony" created this Life Tributes page to make it easy to share your memories.