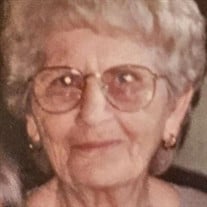 Watervliet-Antoinette “Anne” Green, 96, entered Eternal Life Sunday, February 7, 2021 at Seton Health at Schuyler Ridge. Born in Watervliet, Anne was the daughter of the late Carmen and Susan Tedesco Moffre. Anne graduated in 1943 from Watervliet High School. After high school, she worked at JC Penney’s in Latham. She then went on to raise her two sons. After her children were grown, she rejoined the workforce where she was employed at First American Bank in Latham. She was an avid fan of horse racing. She especially enjoyed spending summer days at the Saratoga Racetrack with her sister and granddaughter. She also loved to play bingo and to go to OTB when the track was not in session. However, her life truly revolved around her family. She was a beloved wife, mother, grandmother, and great grandmother. Anne was known for her famous Christmas cookies and for hosting large family gatherings. Many holidays were spent around her kitchen table where food, laughter, and playing cards were always present. Later in life, she was comforted to know that her granddaughter lived upstairs and was there to help when needed. She will be deeply missed by all. She was the dear wife of the late Joseph M. Green; beloved mother of Daniel (Andrea) Green and Joseph D. (Donna) Green; cherished grandmother of Christopher (Jennifer) Green, Jason (Lisa) Green, Cristi (Michael) Davis, Jena (David) Galinski, and Danny Green; great grandmother of John Galinski, Caroline Green, Catherine Green, Christopher Green, Collins Green, Dylan Green, and Emily Green; sister of the late Mary Collins; aunt of Michael (Cathy) Collins and Kelly (Michael) Cross; several other nieces and nephews also survive. Funeral services will be held privately. Those wishing to remember Anne in a special way may send a contribution to The Community Hospice, Gift Processing Center, 310 S. Manning Blvd., Albany, NY 12208. To leave a message for the family please visit www.McveighFuneralHome.com

The family of Anne Green created this Life Tributes page to make it easy to share your memories.