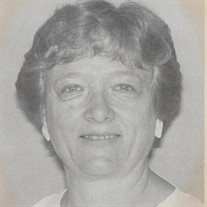 Albany - Anna (Macutek) Gadomski passed away peacefully on Saturday September 16, 2017. Anna was born in Albany on November 13, 1932. Both her parents, Joseph Macutek and Mary Zielonka emigrated from Slovakia and met and married here in America. Anna grew up on Third Street in Albany’s Arbor Hill neighborhood during the Great Depression and World War II. She attended St. Casimir’s Elementary School and graduated from Albany High in 1950. Soon afterwards she began dating a young man she knew from the neighborhood named Henry Gadomski. The two became a couple and became engaged a year later when Henry surprised her with an engagement ring hidden in a box of chocolates. They wed a year later on June 15th, 1952. Anna and Henry celebrated their sixty-fifth wedding anniversary just three months ago. And in their long and happy marriage they had three children; David, Lori and Phillip, and in turn eight grandchildren. Anna was a stay at home mom while her children were young. But in 1965 she began working at the emergency room at St. Peter’s Hospital. She worked there for 25 years. She touched the lives of so many people she worked with and helped in the course of her everyday life. We, her children are constantly meeting people whose lives intersected with Anna. People whose lives she touched in a positive way. It is truly inspiring. Anna and Henry retired together and spent much of their time with their children and grandchildren. And even though they loved their kids, they loved it even more when they would travel down to Florida or over to Maine together for a week alone. But Anna’s heart and thoughts were always with her grandchildren. She was Babci. Even people that weren’t related to her called her Babci. She was notorious for slipping one of the grandkids an extra cookie or a dollar while their parents weren’t looking. Anna is survived by her husband Henry Gadomski, her three children; David (Kathy), Lori (Joe) Herkenham, and Phillip (Sherri). Her grandchildren are Tessa (Michael DePersio), Sarah Gadomski, Paula Gadomski, David (Liz) Herkenham, Annie Herkenham, Christina Herkenham, Hope Gadomski, Charlie Gadomski, CJ Notaro, Mikayla Notaro, Justin Notaro, and 3 great grandsons. She is also survived by her brothers Joseph (Angie)Macutek and George (Helga) Macutek. She is predeceased by her sister Mary (Leo) Nosol. She had many nieces and nephews and cousins whom she loved very much. Anna was predeceased by her husband's brothers and sisters; Adam, Bernard, Joseph (Lillian), Stanley, Jennie (John Zelker), Sr. Agatha, Mary (Sam Restifo), Pauline (Joe Youzwak), Alexander (Mildred), Helen (George McDonnell), Bernice (Tom Dunn), Billy, Clara (Lou Gardner), and Theresa (John Kapela). One of Anna’s favorite charities was the Sister Maureen Joyce Food Pantry that serves the old St. Casimir’s neighborhood. If you prefer a charitable gift in lieu of flowers, please consider this charity. Relatives and friends are invited to visit with Anna’s family on Tuesday, September 19, 2017 from 4:00 to 7:00 pm in the McVeigh Funeral Home, 208 North Allen Street, Albany. Funeral services Wednesday, September 20, 2017 at 11:15 am from the McVeigh Funeral Home, thence to All Saints Catholic Church, Albany at 12:00 pm where Anna’s funeral Mass will be celebrated. The Rite of Committal will immediately follow the Mass at Calvary Cemetery, Glenmont. To leave Anna’s family a message on their guestbook, obtain directions or view other helpful services, please visit www.mcveighfuneralhome.com

Albany - Anna (Macutek) Gadomski passed away peacefully on Saturday September 16, 2017. Anna was born in Albany on November 13, 1932. Both her parents, Joseph Macutek and Mary Zielonka emigrated from Slovakia and met and married here in America.... View Obituary & Service Information

The family of Anna Helen Gadomski created this Life Tributes page to make it easy to share your memories.

Send flowers to the Gadomski family.