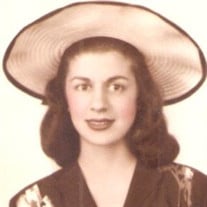 Menands- Angie Urbano, born in Syracuse, New York in 1925, died in Menands on Tuesday, February 27, 2018 after a brief illness. She had just turned 93. She moved to Albany when she was five and never departed, graduating from Cathedral High School and briefly attending Siena College night school during the war. Her father, Louis Panetta, an immigrant and a US Army veteran, owned and ran a butcher shop on lower Madison Avenue in what was then a heavily Italian section of Albany. Her mother, the former Rosa Fuda, was a homemaker who helped her husband in the family business, dispensed shrewd but voluble wisdom and thought it improper for girls to swim, smoke or ride a bicycle. Unfazed by these early impediments, Angie later learned to drive, though not until after her marriage in 1946 to Louis T. Urbano, the founder of the Capitol Press. After raising four children, and buoyed by the growth of the Press, she and her husband branched out into restaurants in the 1970s, helping to found the Gateway Diner on Central Avenue and the 76 Diner in Latham, both of which are still in existence. In the early 1980s, they bought the 21 Restaurant on Elk Street and sustained it, through Angie’s solitary efforts, during its final days as a legislative watering hole and downtown landmark. After his death in 1989 and the sale of the Elk street property, Angie embarked on a final, fond career as a real estate agent with Welbourne & Purdy and gave unstintingly of her time to dozens, perhaps hundreds, of stoutly uninterested buyers. In the years of her semi-retirement, she gave herself over to cooking, gardening and a host of charitable undertakings; in the early 2000s, she regularly cooked meals for the homeless at Joseph’s House in Troy. Elsewhere, her Italian cooking was widely esteemed, and some said, the best they ever ate. Though not really a gardener herself, she took considerable pleasure in the company of gardeners and, in a long career as a member of the Albany and Blue Creek Garden Clubs, was drawn to the beauty and profusion of hydrangeas. Her husband died in 1989, but she is survived by her four children: Roseanne (of Brookline, MA); Christine (of Albany); Maryann (of Brooklyn, NY); and LJ (of Newton, MA), as well as by five grandchildren: Simon Pace, Tom and Lauren Czerwinski, Jesse Englander and Toscana Urbano. Relatives and friends are invited to visit with Angie’s family on Friday, March 2, 2018 from 4:00 to 7:00 pm in the McVeigh Funeral Home, 208 North Allen Street, Albany. Funeral services Saturday, March 3, 2018 at 9:15 am from the McVeigh Funeral Home, thence to the Cathedral of the Immaculate Conception at 10:00 am where her funeral Mass will be celebrated. The Rite of Interment will immediately follow the Mass at Our Lady of Angels Cemetery, Colonie. To leave Angie’s family a message on their guestbook, light a candle, obtain directions, or view other helpful services, please visit www.mcveighfuneralhome.com

Menands- Angie Urbano, born in Syracuse, New York in 1925, died in Menands on Tuesday, February 27, 2018 after a brief illness. She had just turned 93. She moved to Albany when she was five and never departed, graduating from Cathedral High... View Obituary & Service Information

The family of Angela M. Urbano created this Life Tributes page to make it easy to share your memories.

Send flowers to the Urbano family.