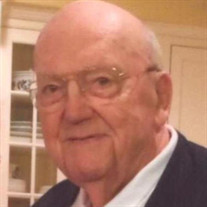 Albany-Andrew James Scanlon Jr. passed away peacefully on January 16, 2022 at Albany Medical Center, he was 92 years old. Andy was born in Schenectady, the son of the late Anna Rose (McCarty) and Andrew James Scanlon. He attended Vincentian Institute and St. Michael’s College, graduating in 1952 with a degree in finance and a minor in philosophy. He began his career at General Electric. He served in the Reserve Officer Training Corps and was commissioned in the United States Army serving in the Korean War. He continued to serve both stateside and abroad outside Paris, France retiring as an Army Captain. Upon his return to the US, he began his finance career at the F&M Schaeffer Brewing Co. in Albany. He went on to serve as Senior Vice President and Treasurer for the Coca Cola Bottling Co. of New York retiring in 1988. He earned his MBA degree and subsequently taught business as an adjunct professor at Dowling College, Oakdale, NY. In 1952, Andy married the love of his life, Dolores Yvonne “Voni” Hensel, They celebrated their 64th wedding anniversary prior to her passing in 2016. They were an inseparable couple. Family was at the center of their lives and they were happiest when hosting family dinners at their home in West Islip, welcoming guests while living in Virginia and most recently relishing time spent with their children, grandchildren and great grandchildren. They were fortunate to have traveled the world during their time with Coca Cola. They were members of the Southward Ho Country Club, Bayshore, NY where Andy served as Treasurer and members of the Kingsmill Resort, Williamsburg, VA. They have been long time parishioners of St. Pius X. Andy is predeceased by his two sisters: Rita (Tony) Rinella and Margaret (Victor) Minotti and by his infant daughter Joann. He remained close to his sisters throughout their adult lives and in later years enjoyed cherished summer vacations on Cape Cod. He is survived by his five children: Patricia Scanlon of Menands, Andrew Scanlon III (Carolyn Arcario) of Naples, FL, Maura O’Brien (Jim) of Loudonville, Susan Wilding (Mark) of Lusby, MD and Michael Scanlon (Mirela) of Richmond, VA. Andy, or Poppy as he is affectionally known, is survived by his thirteen grandchildren: Justin Williams, Andrew Scanlon IV, Joanna Scanlon (Nick Abrams), Stephen Williams, Megan Sozzi (Gary), James O’Brien, Kaitlin Ashman (Alex), Erin O’Brien, Bridget Wilding, Caroline O’Brien, Joseph Wilding, Clara Scanlon, Madison Scanlon, by his five great grandchildren Casandra Sozzi, Luca Sozzi, Delaney Abrams, Liliana Sozzi, Logan Abrams and by his many nieces and nephews. He will always be remembered for his character, integrity, devotion to his family and his sense of humor. He was a great conversationalist and always enjoyed a good discussion. Throughout his life he loved to bring a smile to those around him. Be it through a gesture, an anecdote or one of his many sartorial displays, he always enjoyed brightening others’ days. The family would like to thank the many staff members, nurses and physicians at Albany Medical Center as well as the staff and nurses of the Terrace at the Beverwyck for their excellent care over these past years. Relatives and friends are invited to visit with Andy’s family Friday, January 28, 2022 10:00 am to 11:00 am at St. Pius X Church, Loudonville, NY. His Funeral Mass will follow at 11:00 am. Please only enter the church from the front doorway; church ambassadors will be available to help with seating and questions. Masks are required for everyone; social distancing is also available on the two sides of the church. Please attempt to arrive 15 minutes before the start of the Mass. The Mass can be viewed at https://www.stpiusxloudonville.org/new-live-videos/ The Rite of Committal will be held at Most Holy Redeemer Cemetery immediately following the Funeral Mass. To leave a message for the family please visit www.McveighFuneralHome.com In lieu of flowers, donations may be made to St. Pius X Parish, stpiusxloudonville.org

The family of Andrew James Scanlon Jr. created this Life Tributes page to make it easy to share your memories.

Send flowers to the Scanlon family.