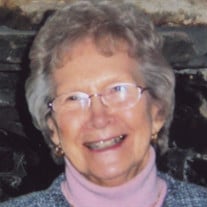 Scotia- Alice Sigrid Bidleman – “Sally” 90, passed away peacefully on Sunday morning April 24, 2016 at the Joan Nicole Prince Home. She was born in Somerset, NY on May 20, 1925 to the late Winifred and Thor Borresen. She worked for Bell Aircraft during WWII and then became engaged to Porter E. Bidleman when the war ended. They were married on April 5, 1947, and just celebrated their 69th wedding anniversary. They moved from western NY to Altamont in 1957 when Porter became owner of the Fredendall Funeral Home. While raising their 3 daughters, Sally was the “wind beneath Porter’s wings,” as they managed, and cared for the families they served at the funeral home for over 25 years. She was an active member of the Altamont Reformed Church, the women’s guild and very involved with the brownie and girls scout program with her daughters. In later years, she developed a strong interest in her heritage and joined the Daughters of American Revolution. One of the greatest joys in her life was vacationing in Ogunquit, ME with family and close friends. Sally and Port were fortunate to spend years camping, skiing, golfing and traveling to many different places. Sally was deeply grateful to travel to Norway, her father’s homeland with her family. Above and beyond all in her life was the blessing of her family; she is survived by her devoted husband, Porter, her loving daughters, Barbara Yohey and Beth Burlingame, her cherished 7 grandchildren; Erin (Sean) Quillinan, Staci (Andrew) Clark , Eric (Heather)Kisby, Alissa Yohey (Chris) Templeton, Michael (Sarah) Yohey, Jason (Katie) Burlingame, Kara (Michael) Banks and 14 sweet great grandchildren. She is also survived by her family; Thor (Carol), Bjarne (Kathy), Joan, Kate (Paul) and Dana. She is predeceased by her daughter, Mary Lou Kisby and her brothers, Thor and Eric Borresen and her son in law, Mark R. Burlingame. Funeral Services will be held at the Altamont Reformed Church on Friday, April 29, 2016 at 2pm. Calling hours will be at the church prior to the service from 12 Noon till 1:30PM. A graveside service will be held at 11 am at the Hartland Central Cemetery in Gasport NY on Monday, May 2, 2016. We would like to express our gratitude to our friends that have been so supportive this past year providing meals, transportation and TLC to Port and Sally. A special thank you to her angels, Marion Monroe and Tootie Fairlee, who have loved and deeply cared for Sally over the last few years. Also, special thanks to the Joan Nicole Prince Home for their compassionate and loving care, not only to Sally, but to Porter and our family. Much appreciation to the Community Hospice, especially the staff at Schenectady Hospice. For those who wish, contribution may be made to; The Mary Lou Kisby -Elizabeth Severson Fund c/o McVeigh FH, the Joan Nicole Prince Home, 22 Glenview Drive, Scotia, 12302 and the Altamont Reformed Church, PO Box , Altamont, NY 12009.

The family of Alice S. Bidleman created this Life Tributes page to make it easy to share your memories.

Send flowers to the Bidleman family.