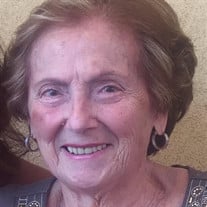 Albany-Agatina (Tina) Macchina, 84, went with the Lord, guided by the angels on July 2nd at the Teresian House. Born in Ali Terme, Messina, and raised in Santa Teresa di Riva, Sicily she was the daughter of the late Giuseppe and Carmela Amato Bonarrigo. Agatina immigrated to the United Stated in 1952. Her first job here was at Albany Felt. Soon after she opened Tina’s Restaurant with her mother Carmela on Central Avenue. In 1958 she married Armando Macchina and was assistant to the Italian Vice Consulate, Joe Muia. In 1968 she and her husband Armando acquired Chiaramonte Bakery in Albany and called it Carosello Bakery. Together as entrepreneurs they would go on to own 8 locations in the Capital District along with Carosello Travel and the Delaware Theatre where they organized concerts of famous Italian singers. Agatina, along with her husband, was the longtime hostess of Italian Carousel TV Show on Channel 13 in the 70’s and Carosello Italiano Radio Show on WQBK for over 20 years. In 1970 they were honored by NY state as Italian Americans of the year. Later in life, Tina worked partime for the Albany School District Food Services and most recently at Roman Jewels and can be seen in their TV commercials along side her grandson Sammy. Agatina enjoyed traveling the world and vacationing every summer in Sicily back to her homeland and to see her many relatives. She‘d take annual trips to Disney World with her grandkids for Thanksgiving. She enjoyed dancing and singing immensely up to the time of her death and kept a rhythm sure to put a smile on anyone’s face. She had a strong sense of humor and an infectious smile and was the most dignified and classy woman of her time. She was strong willed with a heart of gold who helped many fellow Italians with translations and legal paperwork. She was a longtime member of the Sons of Italy and the IACC. She was pre deceased by her husband Armando Macchina; Survived by her loving daughters Helen Macchina who was her caregiver for the past 20 years, Marcella Michel and beloved son-in-law Bobby, her four cherished grandchildren, Martina Nezaj, Amanda & Sammy Fresina and Marcello Michel, all of who she kept so close to her heart and lived to be around them; sister of Carmelo Bonarrigo (Elsie); she is also survived by many nieces, nephews, sister and brothers in-laws and many cousins in Italy. The family wishes to thank the staff at Teresian House for the care they showed her in the past months and especially those who had compassion and showed her love. And thank you to those who took the time to visit her while she resided there. Relatives and friends are invited to visit with Agatina’s family Sunday, July 7, 2019 3:00 pm to 7:00 pm at McVeigh Funeral Home, 208 North Allen Street, Albany, NY 12206. Funeral services Monday, July 8, 2019 at 9:00 am at McVeigh Funeral Home, Albany thence to the Parish of Mater Christi, Albany, NY at 9:30 am, where her Funeral Mass will be celebrated. The Rite of Committal will be held at Calvary Cemetery, Glenmont, NY immediately following the Funeral Mass. To leave a message for the family, light a virtual candle, obtain directions or view other helpful services please visit www.McveighFuneralHome.com Those wishing to remember Agatina in a special way may send contributions to Alzheimer’s Disease Association, 4 Pine West Plaza, #405, Albany, NY 12205

Albany-Agatina (Tina) Macchina, 84, went with the Lord, guided by the angels on July 2nd at the Teresian House. Born in Ali Terme, Messina, and raised in Santa Teresa di Riva, Sicily she was the daughter of the late Giuseppe and Carmela Amato... View Obituary & Service Information

The family of Agatina (Tina) Macchina created this Life Tributes page to make it easy to share your memories.

Send flowers to the Macchina family.